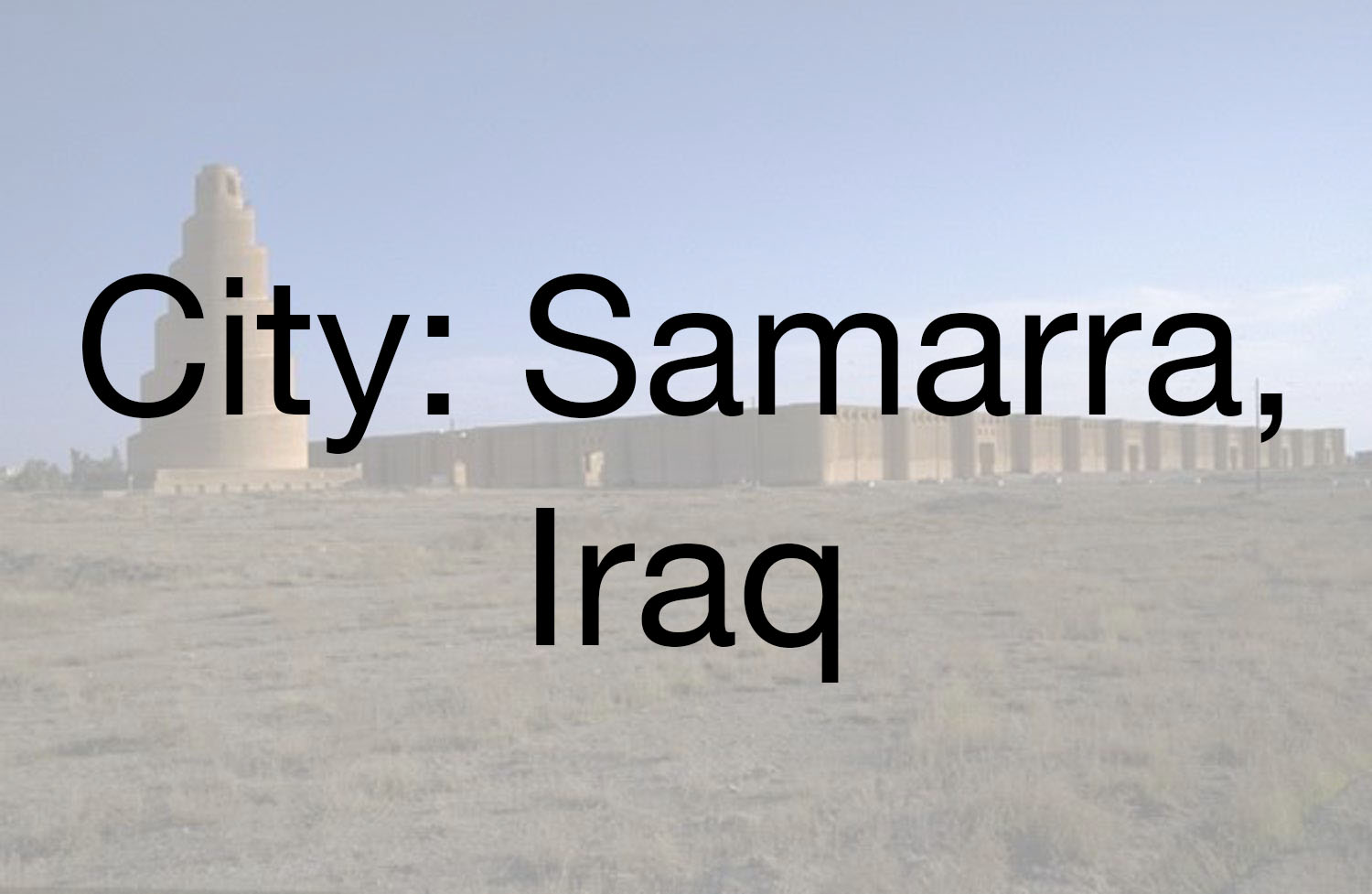 The city of Samarra was the ninth-century capital of the Abbasid caliphate of Iraq for nearly fifty years. It is doubly significant as the site of an early Islamic capital and as one of the largest archaeological ruins in the world: the traces of the Abbasid city stretch for some forty kilometers along the Tigris. Modern Samarra is much smaller than the Abbasid site and so a large portion remains open to excavation and analysis. The ruins of Samarra thus offer an unparalleled glimpse of one version of an early-Islamic imperial city plan.

Several important excavations and surveys have taken place at Samarra. Henri Viollet undertook a series of sondages in the Main Caliphal Palace in 1909 (Viollet 1910). Ernst Herzfeld conducted the first large excavations at the site between 1910 and 1913 (Herzfeld 1912 and 1914).1 Herzfeld’s excavations included portions of the Main Caliphal Palace, The Congregational Mosque of Mutawakkil at Samarra, the Balkuwara Palace, the Qubbat al-Sulaybiyya, and a number of residential structures near the historic city center (Herzfeld 1912 and Herzfeld 1914). The Iraq Department of Antiquities has undertaken a number of excavations from the 1930s (Iraq DGA 1940) through the 1980s, including portions of the Main Caliphal Palace and numerous residential structures.2 Neither Herzfeld nor the Iraq DGA fully published the results of its excavations, so our understanding of even the excavated portions of the site remains partial. In recent years, scholars have used the data from these excavations to offer more extensive reports on the architecture (Leisten 2003) and topography of the site (Northedge 2005). At the time of writing, the most recent contribution is a catalog of the archaeological remains at the site (Northedge and Kennet 2015).

The land around the site is mostly steppe. The Tigris runs swiftly and cuts a deep channel through the region, meaning that situation irrigation and agriculture difficult. Before the foundation of Samarra, the Abbasid caliphs may have used this area for hunting, if textual sources are correct. Traces of a large walled enclosure dating before the rise of Islam at the north end of the site suggest that the Sasanian kings used the land for similar purposes.3

Foundation and history of occupation:

The imperial Islamic city of Samarra was founded in 836/221 AH by the Abbasid caliph al-Mu‘tasim Bi’llah. The origin of the name Samarra is uncertain and likely predates its foundation, but the Abbasids adopted the folk etymology surra man ra’a, Arabic for “happy is he who sees it,” referring to the city by this compound name. Many pre-Modern writers also refer to Samarra by this name.

The impetus for Samarra’s foundation remains uncertain. The most popular explanation is narrated by the historian Ya‘qubi (d. early tenth century/fourth century AH), who saw Samarra himself. He claims that Mu‘tasim founded the new capital in order to alleviate Baghdad of the sizable and increasingly unwieldy imperial army, composed at the time of soldiers from across the Islamic world. Ya‘qubi mentions that a number of non-Arabic speaking soldiers of Turkic origin angered the residents of Baghdad who retaliated against them, compelling the caliph to protect his imperial guard by creating a new city with ample space.4 As compelling as this explanation is, one should consider other factors for Samarra’s foundation, such as boosting the economy through architectural patronage or the precedent of founding new imperial cities (Harun al-Rashid, for example, founded a palace-city outside Raqqa just decades after Mansur founded Baghdad).

The original city plan consisted of a congregational mosque (no longer standing), markets, military cantonments, and the large Main Caliphal Palace complex or Dar al-Khilafa. A wide arterial avenue connected the markets and mosque on the southern end of the site with the palace complex to the north. The cantonments lay between mosque and palace complex.5

After al-Mu'tasim's death in 842, his successor al-Wathiq chose to stay in Samarra. He built a new palace al-Haruni, or al-Quwayr, on the banks of the Tigris that served his successor al-Mutawakkil until 860.

The next caliph to reign at Samarra was al-Mutawakkil ‘Ala-Allah (r. 847-861/232-247 AH), who dramatically altered the form of the city. His first major contribution was the new congregational mosque whose enclosure walls and spiral minaret still stand today. South of the center of the city, he commissioned a new palace known as Balkuwara (Manqur) for his son al-Mu‘tazz.

Mutawakkil’s largest contribution to the Samarra area was in fact to found an entirely new imperial city just to the north of the limits of Mu‘tasim’s foundation. He named this city al-Mutawakkiliyya, and constructed a grand congregational mosque (Jami’ Abi Dulaf), markets, cantonments, and a new imperial palace (al-Ja‘fari). Mutawakkil’s untimely death in 861/247 AH resulted in the abandonment of Mutawakkiliyya and the court’s transfer back to Samarra and its Main Caliphal Palace.

The decades after Mutawakkil’s death were marked by political chaos and the increasing power of the army, with three caliphs placed on the throne and killed by 870/256 AH when al-Mu‘tamid assumed the throne. His brother, who controlled the army and took the regnal title of al-Muwaffaq although he was not caliph, moved the imperial army back to Baghdad, leaving Mu‘tamid in Samarra as a figurehead. Upon Mu‘tamid’s death in 892/279 AH, the court abandoned Samarra completely and reestablished itself at Baghdad.

The court’s abandonment of Samarra meant the end imperial support for the city, and it shrank dramatically to a more sustainable size.6 Although the decline in population must have happened quickly, the fact that coins were still minted at Samarra during the tenth century suggests that the city remained an important regional center.7 By the end of the tenth century, however, the Arab geographers considered Samarra to be a shadow of its former self. The author al-Muqaddasi, for example, wrote in about the 980s/370s AH that Samarra had “gone to ruin, so a man may walk for two or three miles and not come upon an inhabited place.”8

While significantly depopulated compared to its heyday in the ninth/third century AH, Samarra remained an important provincial center after the tenth/fourth century AH due to the presence there of the tombs of the tenth and eleventh Shi’a imams, Ali al-Hadi and Hasan al-Askari. They had resided in a house in Samarra and were buried under their floors. In the 940s/330s AH, the Hamdanid Dynasty, a Shi’a family with local clout in Central Iraq, constructed the shrine known as Marqad al-Imamayn on the site of the house, and the town became a pilgrimage center for Shi’a Muslims.

In the 1950s a barrage was built on the Tigris to divert the spring water ending Baghdad's flooding. The lake behind the barrage caused the inundation of farming communities' lands. Peasants took refuge in the Abbasid ruins. Consequently, the town was enlarged and survived as the market center of its district.