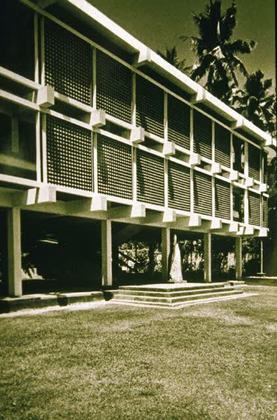 In 1960 Bawa prepared a development plan for Bishop's College, a girls' school to the south of the Beira Lake in Colombo, and as a result was asked to build a three-storey classroom block. The new classrooms were placed at first and second-floor level behind a breathing wall, while the ground floor was left open as a covered activity and play area.

The structure was cantilevered outwards from an in situ concrete portal frame with exposed beam ends. The floor slabs ended on the line of the structural columns and concrete grilles were supported from the ends of the cantilevers at first and second-floor level so that a stack of air could flow up behind them. The delicacy of the grilles was accentuated by narrow vertical gaps between each panel and by clear horizontal openings running between the beam ends. This clear expression of structural and non-load­ bearing elements marked the first appearance of an elevational ordering sytem that Bawa would return to in a number of projects. Over the years clumsy changes have destroyed the clarity of the structural expression and the efficacy of the ventilation.

When the building was nearing completion Bawa's close friend Lidia Duchini, an Italian sculptress, arrived in Ceylon on a two-week visit and Bawa persuaded her to create the sculpture of a bishop that still stands at the foot of the main staircase. Duchini applied the final layer of gold leaf on the last day of her visit before being rushed to the airport.