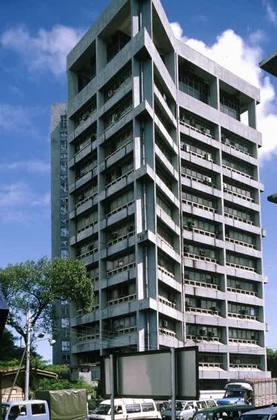 Share
The State Mortgage Bank building in Colombo was designed by Sri Lankan architect Geoffrey Bawa between 1976 and 1978. The tower is fairly atypical of Bawa's work, as the majority of his buildings emphasize the interconnection of building, ground, and landscape. Yet while the building is in many ways a departure from the prevalent interpretation of his architecture that emphasizes the picturesque or vernacular, it possesses a particular adaptation to climate and orientation not present in most tower buildings, evidencing the ecological sensitivity characteristic of Bawa's practice.

The State Mortgage Bank building is located 120 meters south of the tip of Beira lake, adjacent to the northern edge of Hyde Park. Its eastern elevation has continuous street frontage along TB Jayah Road, a secondary traffic artery in Colombo. The twelve story tower is the simple extrusion of an irregularly shaped floor plan. Consequently the building dimensions vary, but the tower is sixty meters long and thirty meters wide at its widest points. The longitudinal axis of the plan, which connects the easternmost and westernmost points of the building, is rotated forty-five degrees counter-clockwise from the north-south meridian.

The floor plan is roughly in the shape of a lozenge, with various crenellations along the exterior facades to accommodate building lobbies and vertical circulation towers. The shorter transverse axis of the plan runs from the northeast to the southwest, while the longer longitudinal axis runs from the northwest to the southeast. A triangular stairwell forms the vertex of the transverse axis on the south elevation, while a trapezoidal stairwell serves as the opposite vertex on the north elevation. The stairwell on the north elevation is surrounded by an elevator core and various enclosed service and lobby spaces. This cluster of walled rooms at the center of the northern elevation blocks views to the north from the interior of the main area of each floor and gives the building a subtle southern orientation.

The columnar arrangement is extremely simple. Only three round concrete columns are needed in the interior of the tower because the exterior envelope is a load bearing structure, as opposed to the curtain wall systems employed in most Colombo towers. Concrete columns spaced at regular intervals along the perimeter of the building support the edges of the concrete floor slabs; at points where the building envelope bends, the rectangular columns are doubled and oriented at perpendicular angles to the direction of each wall section.

The flattened lozenge shaped of the building maximizes the northern and southern exposures while limiting western and eastern exposures. This orientation both reduces solar gain and takes advantage of the prevailing air currents to provide passive ventilation. Deep concrete spandrels provide additional shading and regulate air-intake through louvers below the vision-glass of the windows. The windows are operable on all floors of the tower, pivoting around their central axes to allow building occupants to regulate cross-ventilation.

Though the building was commissioned in 1976 to house the State Mortgage Bank, a reorganization of the Sri Lankan government under the UNP in 1977 resulted in a reassignment of the building before its occupation. The building became instead the headquarters of the Mahaweli Authority, a government ministry founded in 1979 to manage the water and agricultural resources of the Mahaweli river basin. After occupation by the Mahaweli Authority, several key modifications were made to the tower, unfortunately detracting from the elegance of Bawa's original design. The staff of the ministry consisted largely of expatriates who did not wish to rely solely on the passive means of cooling that Bawa had designed. As a result the open floorplans were partitioned and individual air conditioners were installed in many of the exterior windows, cluttering the appearance of the facade and eliminating the visual and physical openness of the interior. The building was also repainted in much brighter colors than Bawa's original subdued color scheme. Security concerns eventually caused the government to define the boundaries of the ministry's site with high concrete walls and barbed wire, restricting the connection between the building and neighboring Hyde Park. The State Mortgage Bank building has not been widely published due to its perceived idiosyncrasy relative to Bawa's practice; however, it continues to provide a valuable model for building climatically-appropriate tower buildings in similar regions.