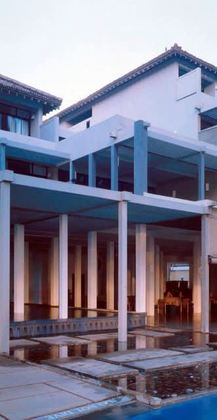 Although Bawa never did manage to build a hotel in the heart of Colombo, his last hotel was located at the southern edge of the metropolitan area at Wadduwa and was conceived as a vast urban palazzo. The developer was Ajit Wijesekera, a garment manufacturer who was new to the hotel business but hell bent on getting Geoffrey Bawa' as his architect. The site had little to commend it: a few hectares of coconut plantation stuck between a featureless stretch of beach and the coastal railway line in the dreary ribbon of suburban sprawl stretching down the coast from Moratuwa to Kalutara.

Bawa trawled through his memory of unbuilt schemes and resurrected ideas that had first surfaced in his plan of the Fiji Suva Hotel. He also went back to a room mock-up made for the Orion Hotel in which the bed faced the window in front of a partially glazed bathroom. The design was developed and the result is a cool and palatial version of the simple rest-house prototype first used in the Serendib Hotel back in 1967. A lofty porch indicates a main entrance in an enclosing wall that screens the hotel from the railway. Doors swing open to reveal a long axial arcade running across a large garden court, past the hotel lobby and out through the coconut grove towards the sea and the horizon. The sequence of spaces is formal and controlled; the materials highly polished, light in tone and muted in colour; the architecture restrained but monumental - the perfect setting for ceremonies and celebrations.