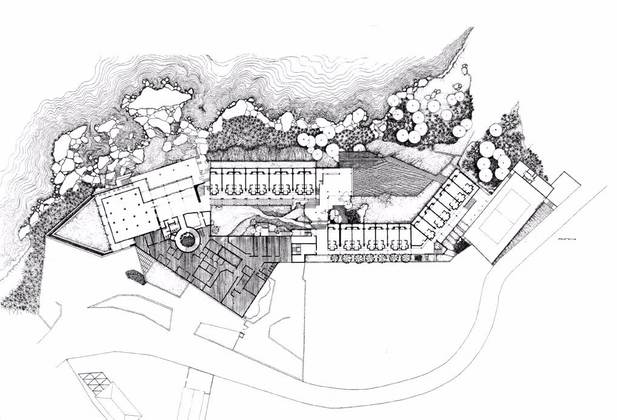 In spite of the downturn in tourism, the Lighthouse Hotel was commissioned by Herbert Cooray in 1995 for his travel company Jetwings. Cooray's father had been the contractor for the Carmen Gunasekera House in 1958, and the Coorays had built a number of Bawa's projects before becoming successful developers and hoteliers in their own right.

The hotel is sited on a rocky promontory once occupied by a magistrates' circuit bungalow, and sits tightly between the main road and the sea about a mile to the north of Galle. The sea is inhospitable but the views are stunning. The main entrance and reception buildings of the hotel hug the southern tip of the ridge and offer views towards the Galle fort, the entrance and service points being housed within rubble retaining walls that enclose the lower slopes of the rock.

A massive porte cochère leads past the reception desk to a vertical drum enclosing the main stair, which spirals upwards to the upper terraces and restaurants. The staircase itself was designed by Bawa's old friend Laki Senanayake and is conceived as a swirling mass of Dutch and Sinhalese warriors re-enacting the Battle of Randeniya. The lounges and restaurants carry memories of old rest houses and planters' clubs, while the furnishing of the terraces and verandahs is solid and rugged to withstand the buffetings of the south-west monsoon. The first floor is finished in samara-coloured render and the upper floor is recessed behind a delicate colonnade. A three-storey range of hotel rooms runs along the edge of the shore northwards from the main reception areas, a parallel service block behind forming a tranquil courtyard of clipped grass and bare rock. A second range of hotel rooms steps back towards the road to create an open terrace with a bar and pool looking out to the ocean.

The strategy is to both confront the relentless crashing of the waves and provide contrasting areas of shelter and tranquillity. No single space is self-contained or complete: each is in part the consequence of a previous space and the anticipation of a subsequent one; each retains links with its neighbours and with the outside so that the eye is continually invited to explore. The architecture itself is muted, but offers subtle memories of Moorish palaces, ocean liners, ancient manor houses and colonial villas.