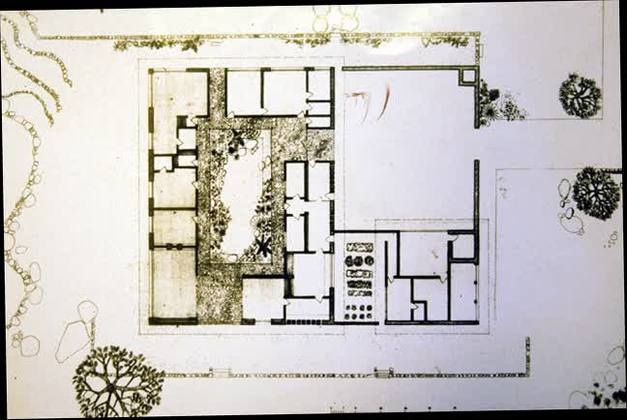 When they were asked to design a manager's bungalow in 1959 on the Strathspey Estate near Maskeliya, at the foot of Adam's Peak in one of the most remote parts of the Tea Country, Bawa and Plesner found themselves creating not a prototype but one of the last of its kind, a memorial to a fast-disappearing way of life.

A tea-estate bungalow can be compared to the concept of villa suburbana developed by Andrea Palladio; it is like a noble villa situated at the centre of a working farm. Indeed the design that Plesner and Bawa developed owes something to the Palladian tradition: the bungalow is contained within a formal perimeter of walls and outhouses, overlooking the estate but distanced from it and combining beauty with convenience. The atrium is employed not as a focus of peace in a hostile urban environment but more as a safe haven within a stockaded enclosure at the edge of a wilderness.
The plan was conceived as a rectangular enclosure, subdivided to create a hierarchy of three courtyards. The entrance gate is signalled by a tall square water tower of white ­ painted rubble at the south-western corner of the enclosure. It leads into an entrance court and is on axis with the main door to the house itself, which occupies slightly more than half the enclosure and focuses on an internal north­ south atrium surrounded by a continuous loggia. The main rooms of the house are all arranged around the courtyard with views out towards the north, east and south, while the kitchens and service rooms are located in the west wing. Mono-pitch roofs slope gently in towards the atrium so that the external eaves cantilever up from the perimeter walls as if to draw in the vast panorama of sky and mountain An open verandah between the dining and living rooms frames views towards the north and can be screened off from both rooms or from the outer garden by a system of sliding panels.
The bungalow was built by a local contractor and most of the materials were found on or near the site: the walls of white-painted rubble have large openings infilled with glass or timber and the floors are of polished black stone. Today the house is shrouded by trees and neat rows of vegetables have replaced the old croquet lawns.
Source: Robson, David. 2002. Geoffrey Bawa: The Complete Works. London: Thames & Hudson, p. 73.