Chapel for the Good Shepherd Convent 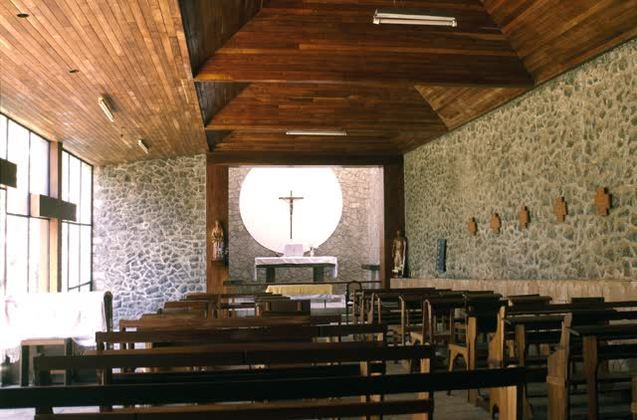 In 1961 the nuns of the Good Shepherd commissioned a new chapel for their convent in Bandarawela. This small market town was situated at 1300 metres above sea level in an area renowned for its pleasant, dry climate and the convent was used as a training centre and a rest home. The original concept was developed by Plesner and Bawa with their friend Barbara Sansoni and the detailed design was then worked up by Laki Senanayake under Plesner's direction. Early sketch drawings by Plesner survive as well as Senanayake's final working drawings.

Lying beyond a group of older convent buildings, the chapel occupies a ridge that falls gently towards the east with steep slopes to the north and south. Its street façade takes the form of a long blank wall of grey rubble terminating in a squat square tower and is relieved by a series of five low recessed bays formed just above ground level by bearing arches. These serve to admit a trickle of ventilation along the inside wall of the chapel and are decorated with panels of patterned terracotta tiles. A small door in the façade - the public entrance to the chapel - opens into a wide vestibule connecting at its opposite end with the more private areas of the convent, and through two doors to the right into the chapel itself.
The chapel's granite floor follows the slope of the ground and falls gently away towards the altar, placed at the base of the tower and lit from an unseen glass roof. The roof of the chapel itself is made up of five angled vaults of red tuna wood. On the south wall of grey rubble stone abutting the road a series of terracotta reliefs depicts the Stations of the Cross, while the north wall carries four full bays of glazing incorporating three large crucifixes at their junctions and opening towards a thickly planted garden with views of distant hills. At night, spotlights illuminate the altar from the tower, while the body of the church is lit indirectly from the garden. Inspired by Donald Friend, Barbara Sansoni produced the terracotta Rising Christ that graces the solid bay in the north wall as well as the Stations of the Cross and the patterned tiles that line the bearing arches.
The chapel is one of the most impressive spaces for Christian worship to be found in Sri Lanka. The overall effect is one of focused calm and sanctity achieved through careful manipulation of space, juxtaposition of simple materials, and the careful control of light and shade. While it makes oblique references to the Romanesque ­ Gothic traditions of Western church building, the chapel has no direct precedents. It was built almost entirely from materials found nearby or manufactured in the vicinity, and seems to grow out of the ground, a building that has been “unearthed” rather than designed.
Source: Robson, David. 2002. Geoffrey Bawa: The Complete Works. London: Thames & Hudson, p. 176-177.