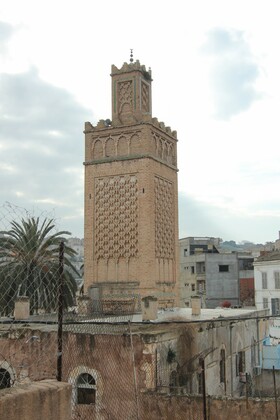 Share
This mosque has kept intact only its minaret, which dates from 1793. An inscription on a marble table embedded in the minaret’s base gives the date of its construction and the name of its founder. Here is an excerpt: “... ordered the construction of this minaret ... Mohammed Ben Othmane, Bey [governor] of the western province of Tlemcen ... in the year 1207.”
At the beginning of the French occupation, this mosque was assigned to the military, where it was used as a hospital. After its restitution to the Muslim community, its prayer hall was rebuilt and offered nothing remarkable. On the other hand, its square-based minaret has kept most of its ornaments. It has features reminiscent of the medieval mosques of Tlemcen, where there are many minarets decorated with diamond patterns.
On the minaret’s north and south sides, the pattern is in the shape of trilobed arch and rest on two arches. On its east and west sides, the pattern takes the form of lambrequin arch and rest on four arches. Indeed, the tower belongs to this category of minarets where the two adjacent sides are decorated differently, such is the case of the Minaret of Agadir in Tlemcen, and Sidi Bu Medyan.
In 1889, the minaret was listed as a historic monument under the name Minaret du Campement. After independence, the mosque was renamed Mohammed Bey Othman El Kebir. However, it kept the name of Sidi al-Houari, the famous patron saint of the city of Oran, who died in this city in 1439, and whose tomb is located some 200 meters from this mosque.
--Amine Kasmi, 2018
SOURCES:
Abadie, Louis. Oran de ma jeunesse, 1935-1962. Nice: Jacques Gandini, 2000.
Bourouiba, Rachid. Apports de l’Algérie à l’architecture religieuse arabo-islamique. Algiers: OPU, 1986.
Cruck, Eugène. Oran et les témoins de son passé. Oran: Heintz, 1956.
Piesse, Louis. Itinéraire historique et descriptif de l’Algérie, comprenant le Tell et le Sahara. Paris: Hachette, 1862.