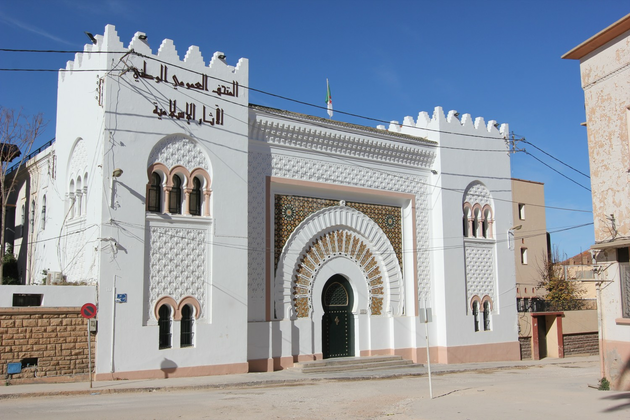 Share
Designed by the French architect Henri Petit (1856-1926), this madrasa was inaugurated on May 6, 1905, when Algeria was under French occupation.
In 1896, the colonial administration allocated funds for the construction of a new madrasa in Tlemcen. The word madrasa being understood by the French as a college graduating officials of the Muslim magistracy, who would be intermediaries of the French state in Algeria. As a matter of fact, the madrasa ended up forming the Muslim elite of the country, by giving Tlemcen a central place in Islamic studies, along with the madrasa Al-Thaâlibyya in Algiers, and the madrasa of Constantine.
Architecturally, classrooms are centered on a beautiful marble-paved courtyard adorned with a fountain. The ground-floor arches rest on massive masonry pillars similar to that of Sid El Haloui Mosque, the arches of the upper floor are lighter in appearance, due to the use of columns and carved spandrels.
The facade of the madrasa adopts the general layout of medieval city gates in the Maghreb. It is a door with monumental decoration, flanked by two square towers crenellated at their summits. The access is an arched opening surrounded by a double row of voussoirs, similar to that of Bab Agnaw in Marrakech. In Tlemcen, the alfiz is in zellij framed by diamond pattern derived from minarets decorations.
In 1951, the madrasa was renamed the Franco-Muslim high school, where not only Islamic sciences were taught, but also French language and literature. It will retain this function until Algeria's independence when it will be transformed into the offices of an administrative district of the Ministry of Education, then into a museum in 2005.
--Amine Kasmi, 2018
SOURCES:
Abadie, Louis. Tlemcen au passé retrouvé. Nice: Jacques Gandini, 1994.