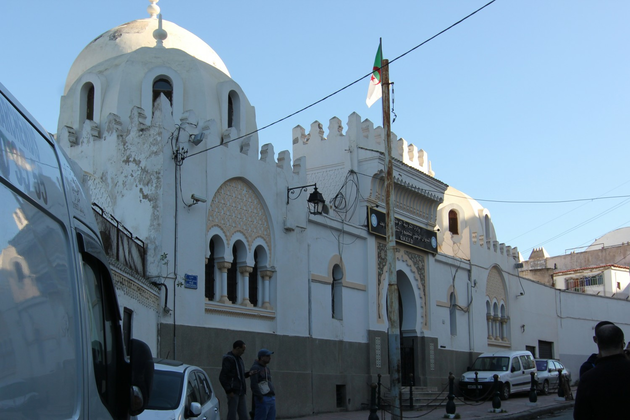 Share
The Madrasa al-Thaâlibyya is named after the patron saint of Algiers Sidi Abd al-Rahman at Ath-Thaâlibi whose mausoleum adjoins the Madrasa. The building was inaugurated on October 17, 1904, when Algeria was under French occupation, under the name of the “Madrasa of Algiers”.

Designed by the French architect Henri Petit (1856-1926), this madrasa has a square plan centered on a double-height hall, covered by a central dome. Four other smaller domes mark the corners of the building and cover the classrooms. This layout looks more like Byzantine Orthodox churches than Ottoman or Moorish buildings. Nonetheless, the shape of the eight-sided domes remains very characteristic of Ottoman architecture. Furthermore, the entrance porch remains of purely Almoravid inspiration with a lobed arch and an awning supported by a series of masonry consoles reminiscent of Tlemcen’s mosques.
The stylistic choice adopted for this madrasa is part of a large policy of the colonial administration which adopted, in the early twentieth century, the neo-Moorish style as the official style of French Algeria. However, this policy did not last for more than a couple of decades.
After its creation, the madrasa was directed by the famous orientalist William Marçais, brother of George Marçais. Several Algerian scholars studied in this school both in Arabic and French. After independence, the building became the headquarters of the National Office of Distance Education (ONEFD).