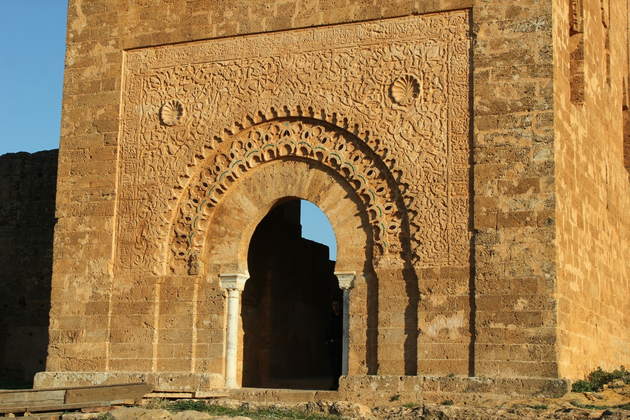 Share
Arguably the most impressive remains of Abu Yaqub's Victorious Camp are those of the Congregational Mosque.  Though all that remains are the minaret, short sections of the walls, and onyx columns that are preserved in the National Museum of Art and History in Tlemcen and in the National Museum of Antiquities and Islamic Art in Algiers, the three remaining sides of the hollow minaret still rise approximately 40 m (130 ft), rivaled only by Jami' al-Hassan in Rabat.

The mosque was built Abu Yaqub in 1302/701/AH, but substantially renovated by Abu Hassan in 1335/735 AH.  The main entrance, was at the base on the minaret, is 2.5 m tall and provides entry to both the minaret and the mosque itself, as the minaret is centered on the wall.  The stairs to climb the minaret were on the inside.  Crossing through the based of the minaret one entered a square courtyard, flanked by three naves on each side.  At the opposite end of the courtyard was the 13 aisle prayer hall.