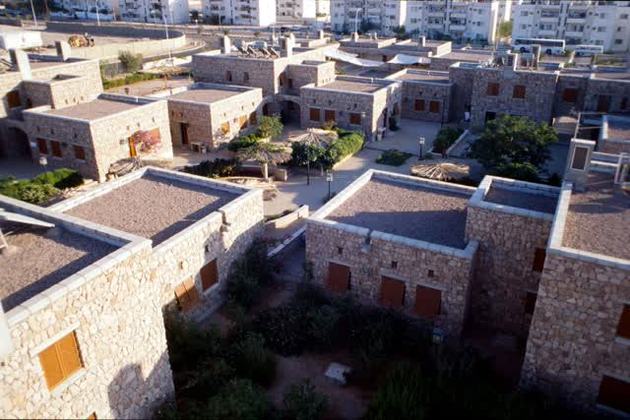 Recipient of the Aga Khan Award for Architecture in 2001.

This SOS complex for orphaned children is located in the residential outskirts of the city of Aqaba, on the Red Sea. A prerequisite of SOS Villages International is that they should be built within an existing social environment so that they are not isolated from it. This was the second such village to be constructed in Jordan. The first is in the capital, Amman, and was completed in 1986; and the third is in Irbid, and was completed in 2000. All three were designed by Jafar Tukan & Partners. The architecture represents a modern interpretation of local vernacular stone buildings. The scale of the village is dictated by its environmentally sensitive design, and also relates to its intimate urban setting. The complex comprises eight family houses, a staff house, an administration building, a guest house, and the village director's residence. All are planned around a village square and are connected via pedestrian paths, gardens, and alleyways. Vaulted archways lead to shaded courts, and gardens surround the buildings. Facilities that are shared with the local community, namely a kindergarten, a supermarket, a pharmacy, and a sports hall, are located at the southern border of the site, close to the main road. The project was a recipient of the 2001 cycle of the Aga Khan Award for Architecture.