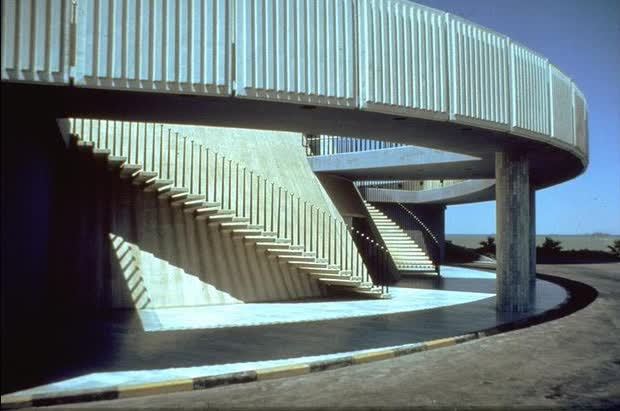 Share
Recipient of the Aga Khan Award for Architecture in 1980.
The water distribution and storage system of Kuwait City received a significant increment in 1976 when the Ministry of Electricity and Water built 33 towers with a combined storage capacity of more than 100'000 cubic metres. Distribution and service zones required the storage of large quantities of water in various locations. Included was the need for locating 9'000 cubic metres at the northern part of the city near the shore of the Persian Gulf. Because of the prominence of this location in the middle of a promontory in the Kuwait Bay, special care was given to its design. The main tower of this group is a hollow concrete column approximately 185 metres high that supports two spheres. The larger sphere, 75 metres high, contains a restaurant, banquet hall, indoor garden and a cafeteria. The lower half of the sphere is a reservoir with a water capacity of just over 4'500 cubic metres. The smaller sphere above it is approximately 120 metres high, and houses a revolving observatory with a café. The second tower of the group, not accessible to the public, supports a spherical water tank. Except for glazed areas, the spheres of both towers are surfaced in steel plates enamelled in bright colours, serving as sun reflectors and inspired by mosaic-surfaced Islamic domes. The third structure, a concrete needle equipped with floodlights, illuminates the other two towers. All the other towers in the system are mushroom-shaped and painted in varied patterns and colours. The towers were commended by the jury "for a bold attempt to integrate modern technology, aesthetic values, functional needs and social facilities in a public facility."