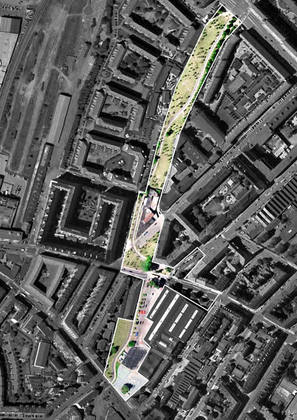 A meeting place for residents of Denmark’s most ethnically diverse neighbourhood and an attraction for the rest of the city, this project was approached as a giant exhibition of global urban best practice. In the spring of 2006 the street outside the architects’ Copenhagen office erupted in vandalism and violence. Having just gone through the design of a Danish mosque in downtown Copenhagen, BIG chose to focus on those initiatives and activities in urban spaces that work as promoters for integration across ethnicity, religion, culture and languages. Taking their point of departure as Superkilen’s location in the heart of outer Nørrebro district, the architects decided they would approach the project as an exercise in extreme public participation. Rather than a public outreach process geared towards the lowest common denominator or a politically correct post rationalisation of preconceived ideas navigated around any potential public resistance, BIG proposed public participation as the driving force of the design. An extensive public consultation process garnered suggestions for objects representing the over 60 nationalities present locally to be placed in the area. The750-metre-long scheme comprises three main zones: a red square for sports; a green park as a grassy children’s playground; and a black market as a food market and picnic area.