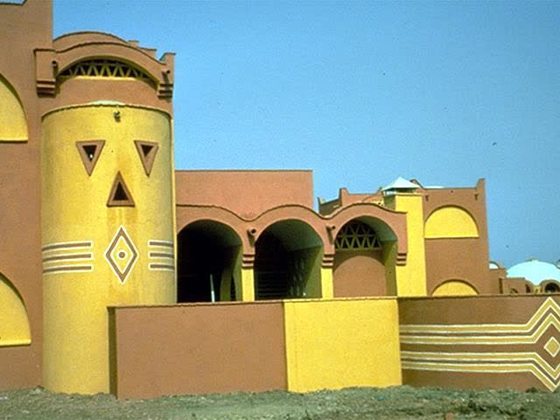 Share
Recipient of the Aga Khan Award for Architecture in 1992.
In 1978 the Panafrican Institute for Development (PID) commissioned the Association pour le Développement d'une Architecture et d'un Urbanisme Africains (ADAUA) to design and build the future campus of the PID in the Sahel, at Ouagadougou. Founded in 1965, the PID is an international African organisation whose goal is to promote integrated, participatory development among the rural and urban populations of sub-Saharan Africa. It is a non-profit organisation without governmental support. The ADAUA, founded in 1975, is composed of about 40 architects, engineers, economists and managers, most of them African, who build in poorer areas. The objectives of the PID for development in Africa coincide with those of the ADAUA. In planning the new campus, both organisations wished to demonstrate the creative potential of local materials and their appropriateness to the socio-cultural context and the climate of the Sahel region. They also sought to demonstrate potential applications for local mass housing and indicate the roles the community can play in the building process. The campus structures consist of three distinct groups: nine professors' houses, student lodgings and the teaching centre which includes library and restaurant facilities. The buildings form a dense urban-like fabric, focusing inward around courtyards. The latter, of varying sizes, shaded and often planted, provide privacy, natural ventilation and coolness. The PID is entirely built of stabilised earth bricks. The earth was procured from land approximately 3 kilometres from the building site. The cement used for stabilisation (the only imported material) came from Togo. The jury believes the PID to represent "one of the most impressive contemporary realisations in stabilised mud brick in Africa. It is a modern work that makes use of improved inexpensive materials and intermediate building technologies, a good example of architectural ingenuity and technical virtuosity."