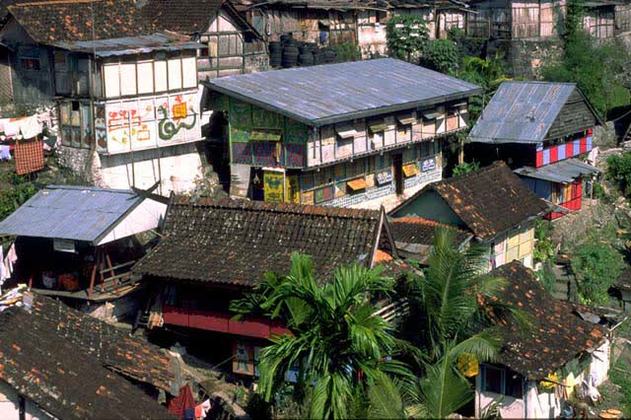 Share
Recipient of the Aga Khan Award for Architecture in 1992.
Kampung Kali Cho-De is an informal village settlement built on government-owned land on the banks of the river Cho-De. The site had been used as a refuse dump. The inhabitants comprise 30 to 40 families whose members do menial labour in the nearby city market. All the squatter dwellings originally consisted of plastic sheet covered cardboard cartons which disintegrated, along with the site itself, with each hard rain. By 1983 the government was about to demolish the settlement, but persuaded by two men - community leader and area sector chief Willi Prasetya, and writer, former Catholic priest, and self-taught indigenous architect Yousef B. Mangunwijaya - it allowed upgrading to commence instead. The pair of community advocates also induced two local newspapers to provide financial help. Design and construction commenced in 1983 and was completed within two years. The design process required few drawings and no construction documents. The steeply sloping narrow site was shored up by a series of stone retaining walls. Because the refuse had been compacted over many years to form a firm base for light-weight construction, wood "A" frame stilt houses could be supported on simple conical concrete footings. Bamboo posts were used for joists and plaited bamboo for walls and floor covering. Roofs are corrugated iron or tile. Three carpenters and two masons were employed from rural villages, the remaining labour force comprising the tenants and volunteers. Guided by volunteer art students, tenants painted the exteriors of their houses using traditional animal, plant and monster motifs. The jury found that although "the scale is small, yet the achievement within the given constraints is immense and humane - a compelling model for the world at large."