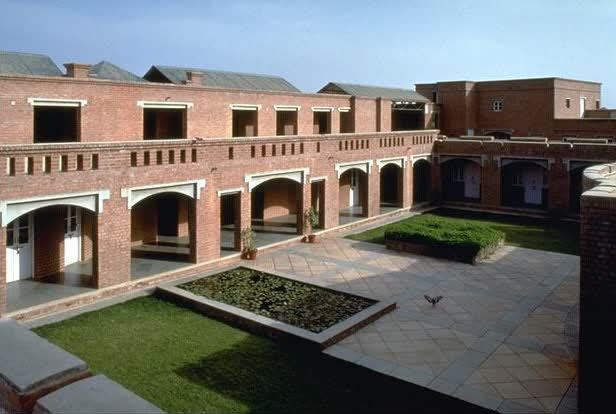 Share
Recipient of the Aga Khan Award for Architecture in 1992.
The Entrepreneurship Development Institute of India (EDII) was established in 1983 to augment the country's supply of entrepreneurs through education and training. In 1985 EDII held a national competition to design a new campus of its own, won by the young architect Bimal Patel who is unrelated to EDII Director Patel. The campus consists of residential facilities, classrooms, offices and a library, organised within seven buildings linked by two axes. An auditorium, to be built in the future, will complete the master plan. Because Ahmedabad was founded in 1411 by Muslims who endowed the city with a splendid mix of mosques, mausolea, courtyard houses, labyrinths of public thoroughfares and alleys, private cul-de-sacs and gates, Patel's design for the campus was strongly influenced by his wish to establish a connection with this rich accumulation of India's past. The architect's organisational principles, as well as his use of a very limited palette of building materials - exposed brick, stone and wood with a minimal application of reinforced concrete, steel trusses and corrugated aluminium sheet - directly reflect their traditional Islamic sources. The jury commended Patel "for his confident use of formal elements growing out of the Indo-Islamic architectural heritage. A series of geometrically structured courtyards and loggias are the primary organising framework. The variation of open, closed and transitional spaces provides light and shade, and creates an inviting environment for work, interaction and repose."