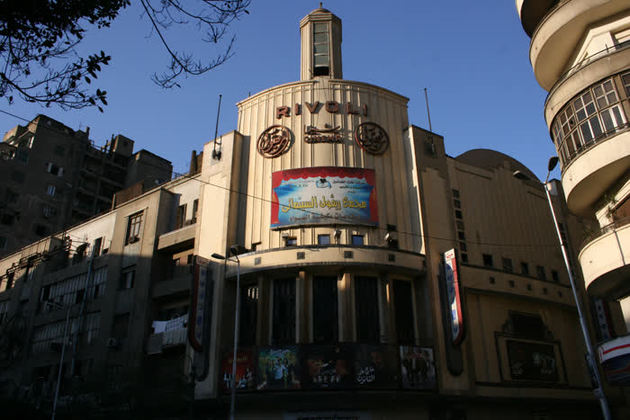 Vanguard programmes such as Art Deco cinemas illustrate technological innovations and symbolise modernity in Europe and The Mediterranean region. Egypt was the most productive country of the Middle East in the field of cinema, especially from the 1940s to the 1960s, which are generally considered as the Golden Age of Egyptian film production. According to Mercedes Volait, architect, historian and CNRS researcher, Cairo had about thirty movie theatres in 1920; most of them don’t exist anymore.

Cinema Rivoli, situated in downtown Cairo near the Mixed Tribunal, features Art Deco architecture in “Streamline Moderne”, emphasizing curving forms. Built between 1945 and 1949, the horizontal line of the facade is inspired by industrial design. Located on a corner site, the main building comprises a central cylindrical element in quarter circle with vertical column-like lines in dress. Another vertical element, similar to a boat’s or a factory’s chimney dominates the elevation. Small square windows are notable, but openings to exterior are minimal. Rivoli perfectly reflected Egypt’s modernity with one the finest examples of cinema in Streamline.