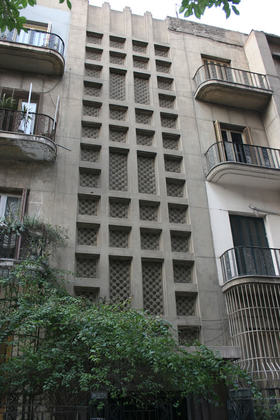 Share
This “immeuble de rapport” situated in Garden City was designed for a family known as Mitry by Antoine Selim Nahas (1901-1966) who was very active from 1934 to 1965.
The outline of the building follows a corner site and contains three different volumes.
The architect features here a Deco building with ornamental sobriety and Streamline Moderne, emphasizing curving forms such as balconies.
The main facade, situated on 16 Nabatat Street, is notable for the original decorative central element made of stone checked patterns. The grid, streamlined rectangular and square forms, contains a series of mosaics which create lighting effects within the hall. We found the same decorative design at 1079 Corniche El Nil, another project designed by Nahas.
Author: Lobna Montasser