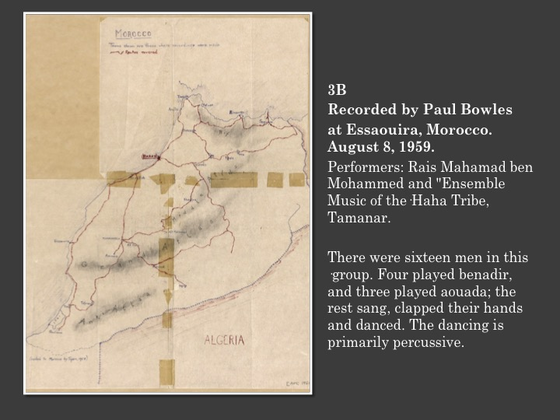 "There were sixteen men in this group. Four played benadir, and three played aouada; the rest sang, clapped their hands and danced. The dancing is primarily percussive.

The musician-dancers are mainly farmers of the region of Tamanar, and it is hard to believe that such a degree of perfection in the way of making percussive music can be attained by a group of untrained non-professionals. Asked for details concerning the purpose of the second of these two selections, the Caïd of Tamanar said: "The Haha use this music to excite themselves, such as before making war, or before marriage,--any time when courage is needed."

Some form of ternary meter is by far the most usual one in Berber music; in this· respect the first selection and the first part of the second on this tape are extraordinary.

The drummer, whose talents the first piece is intended to display, was also the principal dancer. He was a somewhat heavy elderly man, and he was particularly solicitous about seeing that I appreciated his star quality. When he had decided that I was not really aware of it, he seized his opportunity and shouted his name triumphantly into the microphone in the middle of the music."