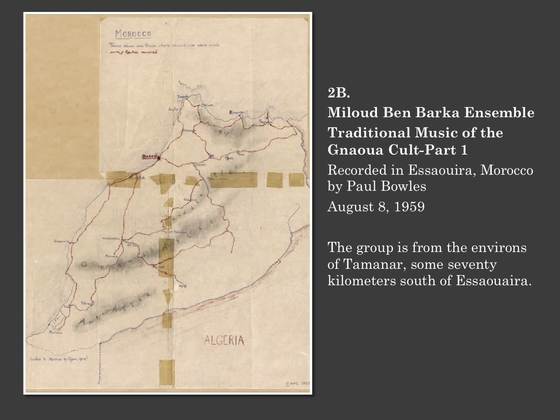 The group is from the environs of Tamanar, some seventy kilometers south of Essaouaira.

I went to Tamanar with the intention of making the recordings there, bt there was no available electricity, and consequnetly the musicians had to be transported from Tamanar to Essaouira.  There were two large drums (tbel) and five men with qarqaba (double hand cymbals of sheet-iron).*  The qarqaba are dumbbell-shaped; the length of these was 27 cm., and the diameter of the disc at each end was 8 cm. The Gnaoua cult is frowned upon nowadays, but tolerated more widely than the other cults such as the Aissaoua, Hamatcha, Haddaoua, etc. They are useful medicine men, it being the custom to call them in for psychic ailments, which they have a particular skill in curing. The Gnaoua are Sudanese; some are the sons of immigrants from the Sudan, but the majority of them were born in the Sudan.  The music one hears in these recordings is what one would hear if one called them in to give treatment.

Unfortunately there is a near-gale blowing the afternoon that they were made; I was unable to escape the roar of the wind.  The music by itself is inclined to the monotonous, but the dance is varied and vigorous.

Of particular interest to American listeners is the second piece on this tape, in which the unmistakably West African character of the vocal line resembles the melody of a Negro “spiritual”.

* They can also be made of bronze.