19B 4 Music of the Rhmara Tribe. (The Spanish spelling of the tribal name is Gomora.) Performers: Rais Mohammed el Khemissi and Ensemble 4. (a) Labanda Ladowa. (b) Allah Ihanik ya Habibi (2 chebabas and 2 tbola) Recorded by Paul Bowles. At Tetuan, Morocco. September 5, 1959 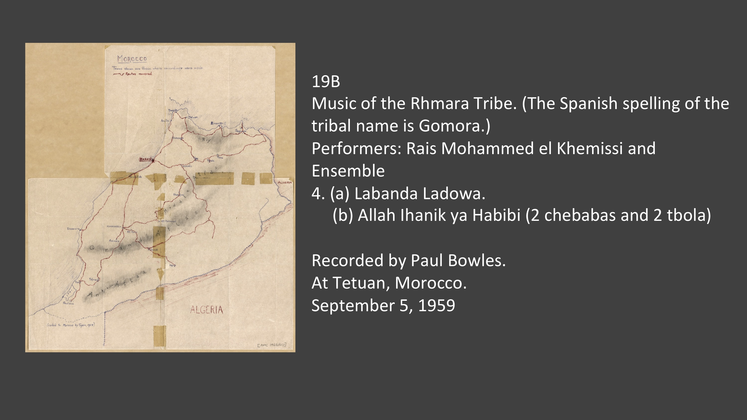 I think the general inferiority of Reel 19  is a result of inexpert musicianship, particularly on the part of the drummers. However, it is always necessary to take into consideration the psychological component: these were musicians from the country playing in a closed room with no audience. It is possible that the same men performing in their accustomed environment would produce much better music.

The resonator of Heuzoumri's guinbri was the shell of a turtle about six inches long by four inches wide. Like the greater part of music elaborated in the cities (Nifdik ya Rhzali is native to Tetuan itself) no. 3 is of Arab inspiration melodically. Occasionally the rhythm automatically discloses its Berber antecedents.
It is difficult to consider no. 4 as two separate numbers, considering the almost identical melody which both songs use. In the very beginning the scale sounds like the first five notes of the major scale, but it quickly becomes clear that the lowest note is sharpened almost a half tone.”
Source:
Bowles, Paul F.  "Tetouan." in Folk, Popular, and Art Music of Morocco. The Paul Bowles Moroccan Music Collection. Washington, DC: American Folklife Center, Library of Congress, 1959-1962.
Associated Names
Associated Collections
Related Images/Videos
Dimensions
13'03"
Languages
Tamazight
Copyright
Aga Khan Documentation Center at MIT
Source
The Paul Bowles Moroccan Music Collection (AFC 1960/001), American Folklife Center, Library of Congress, Washington, D.C., Courtesy of the Paul Bowles Estate and Irene Hermann / Tangier American Legation Institute for Moroccan Studies
Keywords
music
Medium
MOV
Video
IAA129047