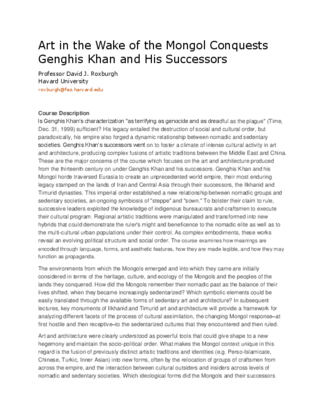 This document is a syllabus reflecting course content developed for "Art in the Wake of the Mongol Conquests: Genghis Khan and His Successors," by Harvard University professor, Dr. David J. Roxburgh

Is Genghis Khan’s characterization "as terrifying as genocide and as dreadful as the plague" (Time, Dec. 31, 1999) sufficient? His legacy entailed the destruction of social and cultural order, but paradoxically, his empire also forged a dynamic relationship between nomadic and sedentary societies. Genghis Khan’s successors went on to foster a climate of intense cultural activity in art and architecture, producing complex fusions of artistic traditions between the Middle East and China. These are the major concerns of the course which focuses on the art and architecture produced from the thirteenth century on under Genghis Khan and his successors. Genghis Khan and his Mongol horde traversed Eurasia to create an unprecedented world empire, their most enduring legacy stamped on the lands of Iran and Central Asia through their successors, the Ilkhanid and Timurid dynasties. This imperial order established a new relationship between nomadic groups and sedentary societies, an ongoing symbiosis of "steppe" and "sown." To bolster their claim to rule, successive leaders exploited the knowledge of indigenous bureaucrats and craftsmen to execute their cultural program. Regional artistic traditions were manipulated and transformed into new hybrids that could demonstrate the ruler's might and beneficence to the nomadic elite as well as to the multi-cultural urban populations under their control. As complex embodiments, these works reveal an evolving political structure and social order. The course examines how meanings are encoded through language, forms, and aesthetic features, how they are made legible, and how they may function as propaganda.

The environments from which the Mongols emerged and into which they came are initially considered in terms of the heritage, culture, and ecology of the Mongols and the peoples of the lands they conquered. How did the Mongols remember their nomadic past as the balance of their lives shifted, when they became increasingly sedentarized? Which symbolic elements could be easily translated through the available forms of sedentary art and architecture? In subsequent lectures, key monuments of Ilkhanid and Timurid art and architecture will provide a framework for analyzing different facets of the process of cultural assimilation, the changing Mongol response–at first hostile and then receptive–to the sedentarized cultures that they encountered and then ruled.

Art and architecture were clearly understood as powerful tools that could give shape to a new hegemony and maintain the socio-political order. What makes the Mongol context unique in this regard is the fusion of previously distinct artistic traditions and identities (e.g. Perso-Islamicate, Chinese, Turkic, Inner Asian) into new forms, often by the relocation of groups of craftsmen from across the empire, and the interaction between cultural outsiders and insiders across levels of nomadic and sedentary societies. Which ideological forms did the Mongols and their successors choose to exploit that were alien to their own tradition (e.g., history, biography, genealogy)? In instances where translation was possible, for example in courtly ceremonial and its settings, what interweavings occur between permanent and impermanent architecture? How were the Mongols accommodated within Perso-Islamicate tradition?

Other themes and topics include the structures developed to propagate a new aesthetic; systems of artistic production and patronage; the manipulation of traditional forms and modes of expression; the role accorded to women in Mongol society and the emergence of other patronage groups (religious and bureaucratic elites, the military class); the range of motives for cultural patronage and building; tensions between nomadic and sedentary groups; and continuities and changes in attitude toward the Genghisid-Mongol legacy throughout the period covered by the course.

Introduction
Images of Genghis Khan and Tamerlane from Then Until Now

Readings
Rival Courts: The Dissemination of an Ideal
On the Margins of Empire: China and Central Asia
Muhammad Siyah Qalam's Nomads and Demons
Section: "Chinoiserie"