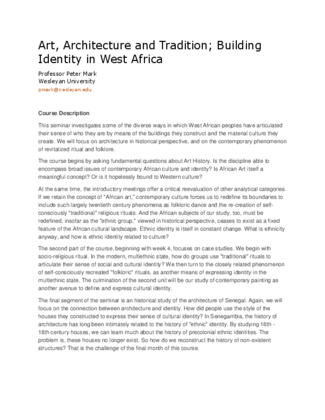 This seminar investigates some of the diverse ways in which West African peoples have articulated their sense of who they are by means of the buildings they construct and the material culture they create. We will focus on architecture in historical perspective, and on the contemporary phenomenon of revitalized ritual and folklore.

The course begins by asking fundamental questions about Art History. Is the discipline able to encompass broad issues of contemporary African culture and identity? Is African Art itself a meaningful concept? Or is it hopelessly bound to Western culture?

At the same time, the introductory meetings offer a critical reevaluation of other analytical categories. If we retain the concept of "African art," contemporary culture forces us to redefine its boundaries to include such largely twentieth century phenomena as folkloric dance and the re-creation of self-consciously "traditional" religious rituals. And the African subjects of our study, too, must be redefined, insofar as the "ethnic group," viewed in historical perspective, ceases to exist as a fixed feature of the African cultural landscape. Ethnic identity is itself in constant change. What is ethnicity anyway, and how is ethnic identity related to culture?

The second part of the course, beginning with week 4, focuses on case studies. We begin with socio-religious ritual. In the modern, multiethnic state, how do groups use "traditional" rituals to articulate their sense of social and cultural identity? We then turn to the closely related phenomenon of self-consciously recreated "folkloric" rituals, as another means of expressing identity in the multiethnic state. The culmination of the second unit will be our study of contemporary painting as another avenue to define and express cultural identity.

The final segment of the seminar is an historical study of the architecture of Senegal. Again, we will focus on the connection between architecture and identity. How did people use the style of the houses they constructed to express their sense of cultural identity? In Senegambia, the history of architecture has long been intimately related to the history of "ethnic" identity. By studying 16th - 18th century houses, we can learn much about the history of precolonial ethnic identities. The problem is, these houses no longer exist. So how do we reconstruct the history of non-existent structures? That is the challenge of the final month of this course.

Does African art exist? Does African art history exist? What is the proper subject of the discipline? of this seminar? A colonial legacy: the mystification and aestheticizing of "African art" Picasso and the myth of "the primitive" Towards a contextual and historical approach

Categories: defining units of study Ethnic groups, ethnicity and the process of identity formation The relationship between ethnicity and culture Culture as dynamic process

Constructing Identity: Architecture in Senegambia from the pre-colonial period to the post-colony

Precolonial architecture of Senegambia, 1500-1850 Flexible identites or, "Who was 'white' in precolonial West Africa? identitarian discourse and 'Portuguese style' houses" The first global style: from West Africa to Brazil to India