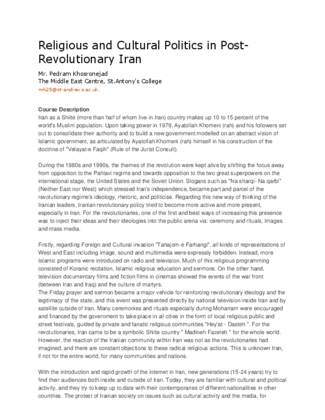 This document is a syllabus reflecting course content developed for, "Religious and Cultural Politics in Post-Revolutionary Iran" by Dr. Pedram Khosronejad for St. Anthony's College.

Course Description
Iran as a Shiite (more than half of whom live in Iran) country makes up 10 to 15 percent of the world's Muslim population. Upon taking power in 1979, Ayatollah Khomeni (rah) and his followers set out to consolidate their authority and to build a new government modelled on an abstract vision of Islamic government, as articulated by Ayatollah Khomeni (rah) himself in his construction of the doctrine of "Velayat-e Faqih" (Rule of the Jurist Consult).
During the 1980s and 1990s, the themes of the revolution were kept alive by shifting the focus away from opposition to the Pahlavi regime and towards opposition to the two great superpowers on the international stage, the United States and the Soviet Union. Slogans such as "Na sharqi- Na qarbi" (Neither East nor West) which stressed Iran's independence, became part and parcel of the revolutionary regime's ideology, rhetoric, and politicise. Regarding this new way of thinking of the Iranian leaders, Iranian revolutionary policy tried to become more active and more present, especially in Iran. For the revolutionaries, one of the first and best ways of increasing this presence was to inject their ideas and their ideologies into the public arena via: ceremony and rituals, images and mass media.
Firstly, regarding Foreign and Cultural invasion "Tahajom-e Farhangi", all kinds of representations of West and East including image, sound and multimedia were expressly forbidden. Instead, more Islamic programs were introduced on radio and television. Much of this religious programming consisted of Koranic recitation, Islamic religious education and sermons. On the other hand, television documentary films and fiction films in cinemas showed the events of the war front (between Iran and Iraq) and the culture of martyrs.
The Friday prayer and sermon became a major vehicle for reinforcing revolutionary ideology and the legitimacy of the state, and this event was presented directly by national television inside Iran and by satellite outside of Iran. Many ceremonies and rituals especially during Moharram were encouraged and financed by the government to take place in all cities in the form of local religious public and street festivals, guided by private and fanatic religious communities "Hey'at - Dasteh ". For the revolutionaries, Iran came to be a symbolic Shiite country " Madineh Fazeleh " for the whole world. However, the reaction of the Iranian community within Iran was not as the revolutionaries had imagined, and there are constant objections to these radical religious actions. This is unknown Iran, if not for the entire world, for many communities and nations.
With the introduction and rapid growth of the internet in Iran, new generations (15-24 years) try to find their audiences both inside and outside of Iran. Today, they are familiar with cultural and political activity, and they try to keep up to date with their contemporaries of different nationalities in other countries. The protest of Iranian society on issues such as cultural activity and the media, for example, photography, music, dance, filmmaking and cinema, is growing, and in the everyday life of Iran, we are witnesses to new phenomena contrary to governmental threats and restrictions.
Shiism: Culture and Post-revolutionary Politics in Iran
Shiism: Material Culture, Rituals and Gender
Shiite Rituals Amongst Women: Space, Singing, Body Movement, Miracle
Women Singers in Iran: Shari'at and Women's Protest in Post-revolutionary Iran
The End: Cultural Politics and Youth
Bibliography
Associated names
Associated collections
Keywords
cultural identity, history, public squares, revolution, social development, symbolism and identity
Country
Iran
Language
English
File type / Size
PDF / 74.7 KB
Copyright
Pedram Khosronejad
Source
Pedram Khosronejad