The Age of Sultan Suleyman the Magnificent: Art, Architecture, and Ceremonial at the Ottoman Court 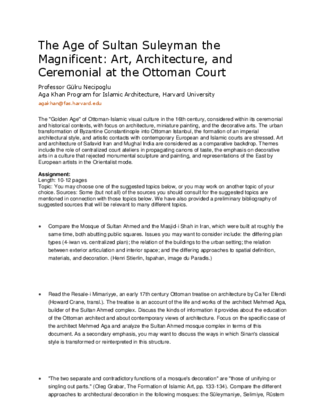 This document is a syllabus reflecting course content developed for "The Age of Sultan Suleyman the Magnificent: Art, Architecture, and Ceremonial at the Ottoman Court," by Gulru Necipoglu for Harvard University.

The "Golden Age'' of Ottoman-Islamic visual culture in the 16th century, considered within its ceremonial and historical contexts, with focus on architecture, miniature painting, and the decorative arts. The urban transformation of Byzantine Constantinople into Ottoman Istanbul, the formation of an imperial architectural style, and artistic contacts with contemporary European and Islamic courts are stressed. Art and architecture of Safavid Iran and Mughal India are considered as a comparative backdrop. Themes include the role of centralized court ateliers in propagating canons of taste, the emphasis on decorative arts in a culture that rejected monumental sculpture and painting, and representations of the East by European artists in the Orientalist mode.

Length: 10-12 pages
Topic: You may choose one of the suggested topics below, or you may work on another topic of your choice. Sources: Some (but not all) of the sources you should consult for the suggested topics are mentioned in connection with those topics below. We have also provided a preliminary bibliography of suggested sources that will be relevant to many different topics.

Atil, Esin. The Age of Sultan Suleyman the Magnificent