The Architecture of Cairo 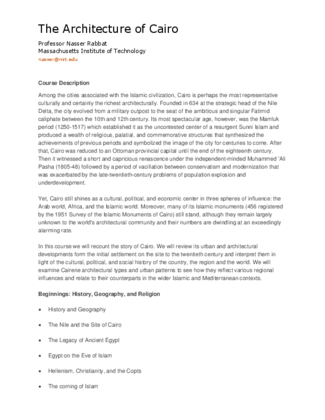 This document is a syllabus reflecting course content developed for "The Architecture of Cairo," by Nasser Rabbat for the Massachusetts Institute of Technology.

See this course as taught in Spring 2002 in MIT's Open Courseware.

Course Description
Among the cities associated with the Islamic civilization, Cairo is perhaps the most representative culturally and certainly the richest architecturally. Founded in 634 at the strategic head of the Nile Delta, the city evolved from a military outpost to the seat of the ambitious and singular Fatimid caliphate between the 10th and 12th century. Its most spectacular age, however, was the Mamluk period (1250-1517) which established it as the uncontested center of a resurgent Sunni Islam and produced a wealth of religious, palatial, and commemorative structures that synthesized the achievements of previous periods and symbolized the image of the city for centuries to come. After that, Cairo was reduced to an Ottoman provincial capital until the end of the eighteenth century. Then it witnessed a short and capricious renascence under the independent-minded Muhammed 'Ali Pasha (1805-48) followed by a period of vacillation between conservatism and modernization that was exacerbated by the late-twentieth-century problems of population explosion and underdevelopmen
Yet, Cairo still shines as a cultural, political, and economic center in three spheres of influence: the Arab world, Africa, and the Islamic world. Moreover, many of its Islamic monuments (456 registered by the 1951 Survey of the Islamic Monuments of Cairo) still stand, although they remain largely unknown to the world's architectural community and their numbers are dwindling at an exceedingly alarming rate.
In this course we will recount the story of Cairo. We will review its urban and architectural developments form the initial settlement on the site to the twentieth century and interpret them in light of the cultural, political, and social history of the country, the region and the world. We will examine Cairene architectural types and urban patterns to see how they reflect various regional influences and relate to their counterparts in the wider Islamic and Mediterranean contexts.

Reading:
Age of the Caliphate: The Fatimids
The Cult of Saints: mashhads and mausolea
The defenses of Cairo

Rise to Prominence: Ayyubids and Bahri Mamluks
Ayyubid Architecture and the Sunni Revival
The Bahri Mamluks: continuity and change
The Apogee of Medieval Cairo

The urban character of Mamluk architecture

Afterglow of Empire: Burji Mamluks and Ottomans
The mosques, madrasas, and mausolea of the Burji Sultan
The growth of Cairo and the development of the Qarafas
The Mamluk style
The coming of the Ottomans
Cairene Ottoman houses
The legacy of the pre-modern city
Reading:
Modernization and After: Muhammad 'Ali to the Present
The architectural and urban works of Muhammad Ali
Orientalism and the Fascination of Egypt
Cairene architecture in the late nineteenth century
Historicism and the Mamluk revival
The Mosque of al-Rifa`i
Other Orientalizing styles
Cosmopolitan architecture
The emergence of vernacular style in the 1940s
Cairo's expansion and modernization
Reading:
Bibliography
Associated names
Associated collections
Keywords
architectural history, cities, urban development
Country
Egypt
Language
English
File type / Size
PDF / 107 KB
Document Date
2002
Copyright
Nasser Rabbat
Source
Nasser Rabbat