The Islamic City: Historicity and Abstraction 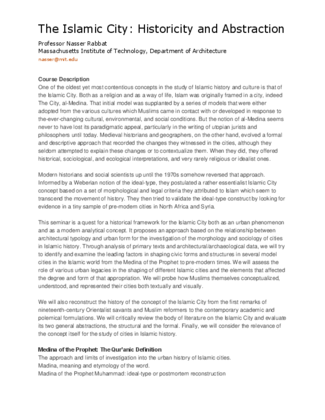 This document is a syllabus reflecting course content developed for "The Islamic City: Historicity and Abstraction," by Dr. Nasser Rabbat of the Massachusetts Institute of Technology, Department of Architecture.

One of the oldest yet most contentious concepts in the study of Islamic history and culture is that of the Islamic City. Both as a religion and as a way of life, Islam was originally framed in a city, indeed The City, al-Medina. That initial model was supplanted by a series of models that were either adopted from the various cultures which Muslims came in contact with or developed in response to the-ever-changing cultural, environmental, and social conditions. But the notion of al-Medina seems never to have lost its paradigmatic appeal, particularly in the writing of utopian jurists and philosophers until today. Medieval historians and geographers, on the other hand, evolved a formal and descriptive approach that recorded the changes they witnessed in the cities, although they seldom attempted to explain these changes or to contextualize them. When they did, they offered historical, sociological, and ecological interpretations, and very rarely religious or idealist ones.
Modern historians and social scientists up until the 1970s somehow reversed that approach. Informed by a Weberian notion of the ideal-type, they postulated a rather essentialist Islamic City concept based on a set of morphological and legal criteria they attributed to Islam which seem to transcend the movement of history. They then tried to validate the ideal-type construct by looking for evidence in a tiny sample of pre-modern cities in North Africa and Syria.
This seminar is a quest for a historical framework for the Islamic City both as an urban phenomenon and as a modern analytical concept. It proposes an approach based on the relationship between architectural typology and urban form for the investigation of the morphology and sociology of cities in Islamic history. Through analysis of primary texts and architectural/archaeological data, we will try to identify and examine the leading factors in shaping civic forms and structures in several model cities in the Islamic world from the Medina of the Prophet to pre-modern times. We will assess the role of various urban legacies in the shaping of different Islamic cities and the elements that affected the degree and form of that appropriation. We will probe how Muslims themselves conceptualized, understood, and represented their cities both textually and visually.
We will also reconstruct the history of the concept of the Islamic City from the first remarks of nineteenth-century Orientalist savants and Muslim reformers to the contemporary academic and polemical formulations. We will critically review the body of literature on the Islamic City and evaluate its two general abstractions, the structural and the formal. Finally, we will consider the relevance of the concept itself for the study of cities in Islamic history.
Medina of the Prophet: The Qur’anic Definition
The approach and limits of investigation into the urban history of Islamic cities.
Madina, meaning and etymology of the word.
Madina of the Prophet Muhammad: ideal-type or postmortem reconstruction
Reading:
Khitat and The Tribal Model
The first garrison towns of Islam. Kufa, Basra, Fustat, Qayrawan.
Orthogonal planning? What model?
City-center: religious and administrative
Tribal structure: Khitat
Reading:
The Classical Model
The Hellenistic and Roman legacy in the Levant. Transformations, continuities, and decadence.
The Umayyad capitals: Damascus and Jerusalem.
The Umayyad cities in the desert: Qasr al-Hayr East, Khirbet al-Mafjar, ‘Anjar.
Modified Roman castrum or condensed madina?
Critique of the French theories (Sauvaget and Élisséeff) on the form of the Islamic City as resulting from the gradual transformation of the orthogonal street pattern of the cities of antiquity.
Reading:
Suggested Reading
The Oriental Model
The Eastern Model: Baghdad of al-Mansur, Hiraqla and al-Qatul (Qadisiyya) of al-Rashid.
Organized plan: Samarra.
Changes in administrative and military structures:
The Development of a Provincial Capital: Fustat, Qata’i‘, ‘Askar, al-Qahira.
The influence of the center's model: was Samarra the urban or the structural paradigm?
Environmental factors, security factors, persistence of old models. Is there a common type of development in provincial capitals?
Reading:
Suggested Reading
The Morphology of the Medieval Model
The question of the Citadel.
The ruler's city and the ruled's city.
The Citadel and the City: Cairo; Aleppo; Granada.
Reading:
The Sociology of the Medieval Model
What happened after the introduction of the citadel as the physically-separate residence of the ruling class?
The alienation of the foreign ruling class from the urban population.
The fragmentation of the city's fabric into smaller units whose security was the responsibility of the inhabitants.
Capital cities in early and medieval Islam and the politico-military background of their structures.
Reading:
Background Reading for the Medieval Period:
Suggested Reading
The View from Within: Ibn Khaldun and Maqrizi
The View from Within: Ibn Khaldun, Maqrizi, Ibn Battuta
The legal basis of the Muslim urban community. The Muslim State.
Reading:
Suggested Reading
The View from Within: Travelers and Illustrators
Ibn Battuta
Wasiti
Matrakci
Reading:
Suggested Reading
Modern Concept of the Islamic City
The modern abstractions of the Islamic city: structural and formal.
Reading:
Suggested Reading
Critiques of the Concept
Critics of the theories on the Islamic city: a review
Reading:
Suggested Reading
Preleminary Bibliography
Associated names
Associated collections
Keywords
architectural history, cities, medinas, urban development
Language
English
File type / Size
PDF / 285 KB
Copyright
Nasser Rabbat
Source
Nasser Rabbat