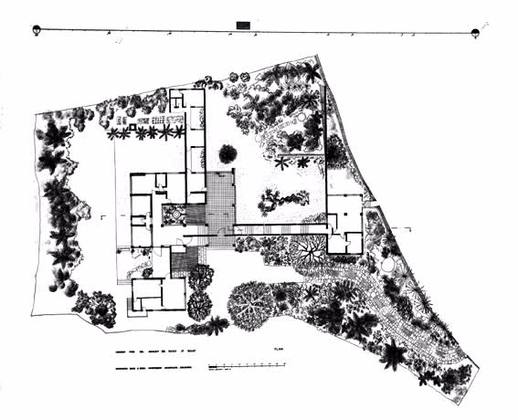 A.S.H.de Silva, a young doctor setting up a practice in Galle, wanted to build a house and surgery on a steeply sloping site on the northern edge of the town and picked Bawa's name out of the local telephone book. Bawa's design deconstructs the colonial bungalow and reassembles the parts in an apparently informal way to create a chequerboard system of linked pavilions trapping small gardens and courts between them. The separate elements are unfettered by a defined boundary but linked by a single roof plane and a long, raking spine wall. The roof design resembles the solution Bawa had recently adopted for a clubhouse at Ratnapura Tennis Club, also situated on a steeply sloping site.

At the foot of the slope sits the doctor's consulting room beside an open loggia that served as the patients' waiting room, connected to the house via a long staircase tunnel. This serves as the boundary to the garden,a pointer to the main entrance of the house and a device to lead the visitor up to the very heart of the design. On plan the main house appears to be a simple rectangle arranged around a central courtyard, though the section articulates the upper bedroom wing from the lower living area. A separate wing containing the kitchens, kitchen courts and servants' rooms between two parallel walls runs southwards from the living area along the contours of the site, while a pavilion to the north contains an independent flat for the doctor's sister. The house remains relatively extrovert: the internal spaces flow out into the gardens, which, in turn, reach out towards the surrounding landscape. The articulation of the plan elements and their disposition on the slope in relation to open courtyards and gardens makes good environmental sense: every room benefits from cross-ventilation or from a stack effect induced by the roof.

The plan can be compared to Mies van der Rohe's 1923 Brick Villa project, and there are certainly many similarities: both set out to deconstruct the traditional villa, both make a clear distinction between 'wall' and 'no wall', and both use continuing wall planes to link inside and outside space and to define out­ door rooms. But Bawa exploits the sloping site to create additional spatial effects, using the roof plane to anchor the elements to the site. He replaces Mies's solid hearth core with a void so that here, for the first time, an open courtyard occupies the very heart of the plan. While he has arrived at a solution that can be compared to the courtyard or meda midula of a traditional Sinhalese manor house, he has come to it on a fairly long and circuitous route. In typical fashion he has taken one idea -the Miesian pinwheel plan -and added others - the sloping roof, the central court - in order eventually to create something quite new.

This was a time of severe economic restraint, with imports strictly controlled. When Bawa wanted to line the central pool with blue glazed tiles Laki Senanayake achieved the desired effect with broken Milk of Magnesia bottles. However, the house's design achieved the synthesis for which Bawa had been striving: clean abstract forms are arranged in an informal way to embrace areas of landscape and to break down the separation of inside from outside. 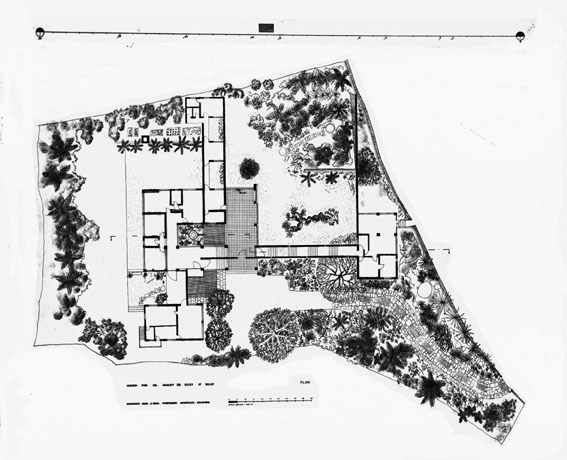