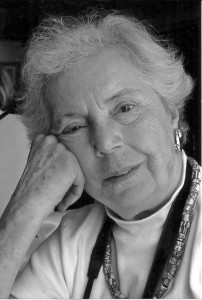 Margaret (Peggy) Frank Crawford was an American photographer, writer, and educator.  She was born in Cincinnati, Ohio on October 18, 1917, and attended Smith College, where she graduated as a member of the class of 1938 with majors in French literature and art history. She spent her junior year in Paris, which would have a profound impact on her work and her life.

After graduating from Smith, she founded the “Modern Art Society” in Cincinnati (now called the Contemporary Arts Center) along with Betty Pollock Rauh and Rita Tentschler, two other young Cincinnati women. She served as founding director from 1939-1942.

In 1942, Crawford married her husband Ralston, and the couple moved to New York where they raised sons Robert, Neelon, and John. In New York, she earned a master’s degree from the Banks Street School of Education and became a reading teacher. She also took courses at the International Center for Photography, building on a love for photography she’d had since taking her first photo with a box camera at the age of seven. By the late 1970s, Crawford had mastered printing color photographs in her own darkroom, shooting such varied subjects as nature, portraits, architecture, and cityscapes.

In 1985, Claudie Fayein, a French doctor, honorary citizen of Yemen, and a friend of Crawford’s since the 1950s invited her to come along on a trip to Yemen. It was the first of nine trips she would make to the country, visiting both North and South Yemen and later the unified Yemen Arab Republic  and documenting its people, architecture, and landscapes. In 2005, Crawford published An American in Yemen: Travel Notes of a Photographer in English and French. The Peggy Crawford collection of slides, made on her nine trips to Yemen between 1985 and 2004, is held by the Fine Arts Library, Harvard University.