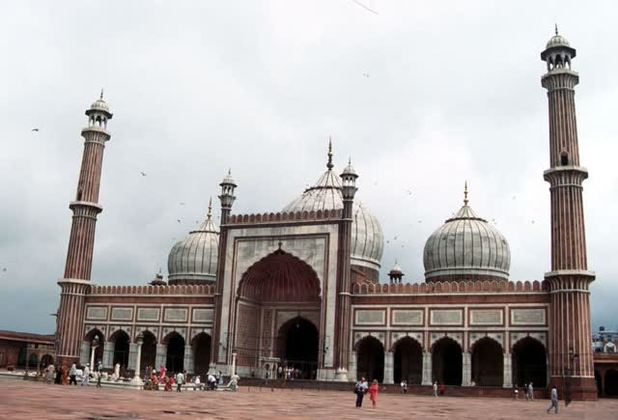 Share
The Friday Mosque is the congregational mosque of Old Delhi (Shahjahanabad), the seventh Islamic city built on the site of Delhi. The mosque was commissioned, like Shahjahanabad itself, by Shah Jahan (r. 1628-1658), the fifth Mughal ruler of India. The construction of the monument began in 1650 and took six years, an estimated one million Indian rupees, and five thousand masons to complete. The construction was supervised by Allami Said and Fazl Khan. The mosque is also called the Masjid-i Jahanuma, or 'the mosque commanding a view of the world,' as it is sited on a high plinth atop a natural hillock. At the time of its construction, it was the largest mosque in the subcontinent and today it is exceeded in size only by the Friday Mosque of Lahore, Pakistan. Due to its magnificence and size, the Friday Mosque of Old Delhi is often regarded as the apotheosis of Indian mosque design.

In 1638, Shah Jahan shifted his capital from Agra to Delhi and laid out a new city, Shahjahanabad, along the eastern banks of the river Yamuna. He constructed the Red Fort at the northeastern edge of the city and placed the Friday Mosque about five hundred meters to its west. The mosque resembles earlier congregational mosques in Delhi, which are characterized by 2 parts: a main prayer hall and a large cloistered courtyard preceding it towards the east. The exterior of the Friday Mosque was modeled after Akbar's mosque at Fatehpur Sikri, while its interior is akin to the Friday Mosque at Agra.

The mosque is separated from nearby roads and the dense city fabric by open lawns of about thirty meters in depth. Elevated approx. ten meters from the level of the city, the mosque contains a square courtyard (ca. 115 meters/side). The main prayer hall (ca. 70 meters north-south by ca. 25 meters east-west) is located along the western side of the courtyard.

Gateways:
Red sandstone gates access the courtyard from the centers of the north, south, and east sides and lead down to the city via three-sided stairways. The gateways and the steps are finished in red sandstone; the steps have white markings on the risers to indicate positions during prayers. The eastern approach, originally reserved for the king and his court, is the most prominent, measuring three stories in height while the north and south are only two stories tall. The east gate measures ca. 25 meters north-south by 20 meters east-west. Its street elevation is dominated by a large three-story ogee arch iwan set into a rectangular frame. Cusped arched recesses flank the iwan on either side and at each level. Each corner of the gate is chamfered and punctured at each level by arched recesses, accessible balconies protected by low stone parapets. The rear wall of the iwan is punctured by an double-height ogee arched doorway leading into the domed interior of the gateway structure and subsequently into the courtyard of the mosque. The gateway is crowned by a continuous blind parapet described by arched crenellations. The eastern elevation, as are the adjacent chamfered faces, is further adorned with an intricate arched arcade atop the parapet, with a total of twenty-five white marble domes crowing the structure. Four convex fluted minarets rise above the parapet; the eastern minarets associated with the arcade rise higher and are finished with octagonal domed chhatris. The iwan and balconies on the eastern elevation are also reflected on the western elevation, although the iwan is not as deep. In addition, a jharokah (projecting balcony), supported on stone brackets, adorns the tympanum above the entrance doorway. The other two gates are smaller two-story structures similar to eastern main gate and with street elevations described by a double-height iwan.

Courtyard:
The floor of the courtyard is paved with red sandstone, interrupted by white marble strips which mark prayer positions for worshippers. Open arcades run along the edges of the courtyard between the gates; the city and the Red Fort are visible through these arcades. Chhatris mark the four corners of the courtyard and rise above the arcade roofs.

An ablution tank (ca. 17 m. north-south by 15 m. east-west), surrounded by a raised three-meter-wide white marble platform, is located in the center of the courtyard. An intricately embossed marble fountain is located in its center, and marble lampposts three meters in height mark its corners.

Prayer Hall:
The prayer hall, measuring 61 by 27 meters, is raised approximately 1.2 meters from the ground and projects into the courtyard; this placement makes it appear independent from the arcades terminating at its sides. Its eastern, entry elevation is dominated by a central projecting pishtaq with slender minarets at its corners; these culminate in white marble chhatris atop lotus-shaped capitals. The pishtaq is clad in white marble with red sandstone trimmings and completed by a crenellated blind parapet. Its rear face is punctured by a broad cusped arch that provides entry into the mosque. Above the arch, the half-dome of the pishtaq iwan is clad in red sandstone with white marble strips and flanked on either side by five smaller cusped arches. Above the line of arches is a white marble blank frieze with Arabic inscriptions framed in red sandstone. Each arch has a framed inscription above it, followed by a continuous red sandstone horizontal band and a crenellated blind parapet similar to that found atop the pishtaq. The pishtaq's flanking wings are lower than the pishtaq itself, reaching approx. 10 meters above the courtyard. At the outer edge of each wing is a 40-meter-tall red sandstone minaret with inlaid white marble strips. Three accessible projecting galleries occur at regular intervals along the 130 spiral steps leading to the top of each minaret. The highest gallery is topped by a domed white marble chhatri. Well beyond the pishtaq rises the largest of three bulbous domes clad in white marble and inlaid with black marble strips and topped by golden finials.

The prayer hall is accessed via stairs located at the centre of the pishtaq and at the centre of each adjacent wing. Within, the hall is divided into two aisles running parallel to the western qibla wall and leading to side courtyards. The inner aisle (facing the mihrab) is divided into seven bays; the central bay with the mihrab niche is the largest. These bays are spanned by cusped red sandstone arches with white marble inlay work in both the lateral and the cross directions. The vertical surfaces in the prayer hall are clad in white marble to a height of about 2.5 meters from the floor; above the point, the walls, ceiling and niches are clad in red sandstone. The western wall is described by niches corresponding to the seven bays. The central mihrab niche, formed of cusped arches set in a rectangular frame, is completely clad in white marble with intricate embossed tracery. The three-step minbar, carved from a single block of marble, is located to its right. The outer aisle of the hall is divided into two parts by the central pishtaq portal, with five arches occurring on either side of it, connecting the mosque to the courtyard. The floor of the prayer hall is paved with white marble with a
prayer-mat inlay pattern.

The Friday Mosque of old Delhi is clad completely in red sandstone, with white marble employed in the domes, ceilings, and floor of the prayer hall. Black marble inlays further embellish this material palette; for example, the geometry of the domes is exaggerated by inlays running from base to apex. In similar fashion, the minarets are decorated with vertical white marble inlays. The interior surfaces of the prayer hall are decorated with fine inlay work and Arabic inscriptions, as is the east elevation of the mosque.

Today, the Friday mosque of old Delhi continues to carry out its congregational function, while the grand imperial gesture that it embodied serves as a reminder of the city's history.