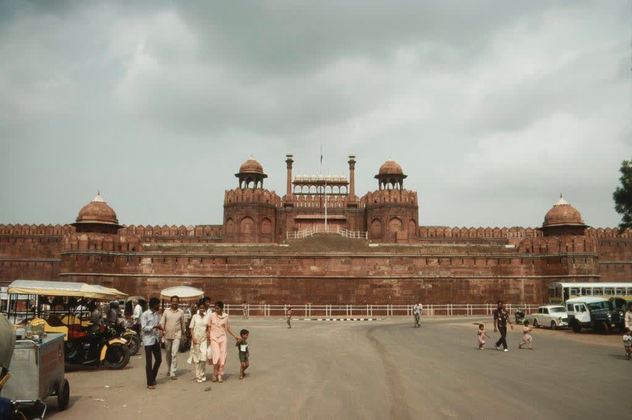 Share
The Red Fort was the palace for Shah Jahan's new capital, Shahjahanabad, the seventh Muslim city in the Delhi site. Shah Jahan (reg. 1638-1658) moved his capital from Agra in a move designed to bring prestige to his reign, and to provide ample opportunity to apply his ambitious building schemes and interests. The city was planned on a bluff along the western bank of the Yamuna River, with the fort strategically positioned at its eastern periphery and its western edge dominating the city to the south and west. The Yamun once fed the moats that surround most of the fort wall. The wall at its northeastern corner is adjacent to an older fort, the Salimgarh, a defense built by Islam Shah Sur in 1546.

The fort was built by Ustad Ahmad Lahori, who had worked with the architect of the Taj Mahal. The construction was supervised by Ghairat Khan, the governor of Delhi when the construction commenced in 1638. The fort takes its name from the massive wall of red sandstone that defines its eight sides. The wall is 1.5miles (2.5km) long, encircles nearly 125 acres of land, and varies in height from 60ft (16m) on the river side to 110ft (33m) towards the city. The fort has an irregular, though largely rectangular plan; its measurements are based on the gaz, or zira, which measures approximately 81-82 centimeters. The longer sides along the east and west measure 656 meters, while the shorter sides along the north and south measure 328 meters, and the chamfered corners measure 82 m, or a hundred gaz. The ideal rectangular plan was compromised at the northeast corner to accommodate the aforementioned Salimgarh Fort within the larger fortification.

In the 18th century, occupiers and looters damaged some sections of the palace. After the Sepoy mutiny of 1857, when the Fort was used as a headquarters, the British army occupied and destroyed many of its pavilions and gardens. A program for restoring the surviving parts of the fort began in 1903. Today, the only structures remaining are those chosen for preservation by the British; the landscape context of gardens and courtyards that formerly defined the individual buildings is lost.

The walls of the fort are smoothly dressed, articulated by heavy string-courses along the upper section. They open at two major gates, the Delhi (Akbarabad) gate to the south and the Lahore gate to the west. Both gates are preceded by barbicans that were added by Awrangzib (reg. 1658-1707). The Lahore Gate is the main entrance along the west-east axis; it leads to a long street lined with arcades, the Chatta Chowk, which partially retains its function as a bazaar. This series of arcades runs for about 70 meters and is approximately 8 meters wide; each side holds 16 arched bays. The Chatta Chowk leads to a large open space where it crosses the large north-south street that was originally the division between the fort's military functions, to its west, and the palaces, to its east.
This major north-south street, which now contains the Faiz Bazaar, leads south to the Delhi gate and onwards to the congregational mosque of Shahjahanabad (Friday Mosque of Delhi).

Continuing on axis with the Lahore gate and the Chatta Chowk, on the eastern side of the open space, is the Naqqar Khana ("drum house"), the main gate for the palace area, named for the musicians' gallery above it. Beyond this gate is another, larger open space, which originally served as the courtyard of the Diwan-i 'Am, the large red sandstone pavilion for public imperial audiences, measuring 57 by 21 meters and formed of cusped arches. Originally, both the drum tower and the hall of public audiences stood within a courtyard enclosed on all four sides by an arcade, which was demolished during the British occupation.

An ornate throne-balcony ("jharokha") for the emperor stands at the center of the eastern wall of the Diwan, conceived as a copy of the throne of Solomon. Fashioned as a free-standing pavilion on a high plinth with a Bengali roof, it is composed of marble with floral carvings. The upper portion of this jharokha is decorated with polychrome inlay work, including a set of pietra dura panels of black marble, depicting Orpheus surrounded by animals; these panels are cited as being Italian imports. Other surrounding panels of white marble with pietra dura depict bird and plant motifs in an Indian style.

The west-east axis continues through the Diwan-i 'Am and into the private zone of the palace to the Rang Mahal, one in a series of pavilions that run north-south along the river edge (eastern edge of the fort). This string of pavilions begins at the northeast with the Shah Burj (king's tower), crowned by a chattri. The Shah Burj is also the point at which water is drawn from the river and directed through a continuous water channel, the Nahr-i-Behisht, or "Stream of Paradise," which runs through the center of each of the private royal pavilions.

The residential palace is designed as an imitation of paradise as it is described in the Koran; a couplet repeatedly inscribed in the palace reads, "If there be a paradise on earth, it is here, it is here". The planning of the palace is based on Islamic prototypes, but each pavilion reveals in its architectural elements the Hindu influences typical of Mughal building. The palace complex of the Red Fort is counted among the best examples of the Mughal style at its Shah Jahani peak. Each pavilion is constructed of white marble or brick with polished plaster and preceded on the west by a courtyard.

Moving from north to south from the Shah Burj along the Nahr-i Behisht are the hammam (baths), with its inlaid marble floors, walls, and sunken pool and polychrome stone ornamentation. Next is the Diwan-i Khass, or hall of private audience, used for ministerial and court gatherings. Rectangular in plan and measuring 27.5 meters north-south and 14.3 meters east-west, it is the most lavishly decorated of all the pavilions, with floral pietra dura patterns on the columns, precious stones, and gilding. This hall also contained Shah Jahan's famous Takht-i Shai, or peacock throne.

A painted and carved wooden ceiling has replaced the original of silver inlaid with gold that as looted in the 18th century. The exterior elevations of the Diwan-i Khass feature cusped arches on rectangular columns, above which runs a continuous projecting chajja (eave) and a parapet atop. Chattris mark the four corners of the building's roof.

Continuing along the channel to the south, the next pavilion is the Khwabgah (Khass Mahal), or imperial sleeping quarters. These include a suite of bedrooms, prayer rooms, a veranda, and the Mussaman Burj (Burj-i Tila), an engaged octagonal tower projecting from the fortress wall towards the river. Here, the emperor would show himself to the people in a daily ceremony.

South of the Khwabgah are two pavilions that formed the zenana, or women's quarters: first, the Rang Mahal, notable for its gilded, decorated ceiling and central marble pool, fed by the Nahr-i Behisht.

The southernmost pavilion, the Mumtaz Mahal, is now a museum.

To the west of the hammam is the Moti Masjid, or Pearl Mosque. This was a later addition, built in 1659 as a private mosque for Awrangzib, Shah Jahan's successor. It is a small, three-domed mosque in carved white marble, with a three-arched screen which steps down to the courtyard.

To its north lies a large formal garden, the Hayat Bakhsh Bagh ("Life-Bestowing Garden"), which is cut through by two bisecting channels of water. A pavilion stands at either end of the north-south channel, and a third, built in 1842 by the last emperor, Bahadur Shah Zafar, stands at the center of the pool where the two channels meet.