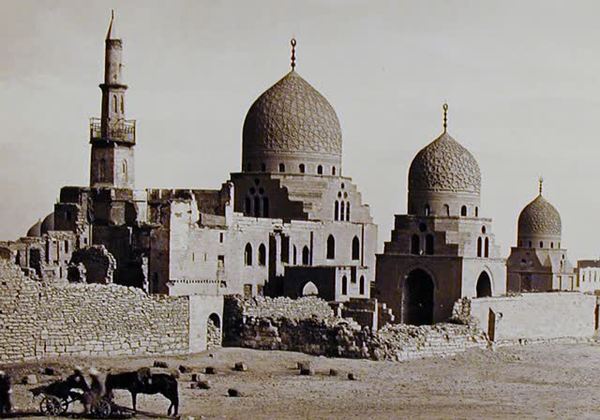 Share
The foundation of Sultan Barsbay in the Northern Cemetery was built in 1432-3. Its madrasa, dedicated to Sufi students studying the Hanafi rite, comprised a covered prayer hall that also served as a congregational mosque for daily Sufi practices in the afternoon. The Sufis were housed in an apartment building (rab') detached from the main madrasa hall, consisting of duplexes with private latrines. Two zawiyas are introduced here along with the khanqah for the first time in Mamluk religious architecture. The zawiyas, of which only the one dedicated to the Rifa'i Sufi order is still extant, provided lodging for the resident shaykh and Sufi visitors. The zawiya or qubba of al-Rifa'i was restored in 1478.

In early Mamluk khanqahs, cells were integrated into the body of the cruciform four-iwan complex, which also had a courtyard, a prayer hall, and subsidiary iwans, since the introverted nature of the monastic institution did not require a differentiation between public and private spaces. The integration of the khanqah into the madrasa provided Sufis with a new worldly exposure. The addition of the zawiyas to the complex of Barsbay, which accounts for the reduction in the size of the khanqah, the transformation of the prayer hall into a congregational mosque, and the separation of the Sufis' cells from the main body of the religious complex, all indicate the emergence of a new form of Sufism that abandoned the secluded monastic life. Zawiyas, which disseminated the ideology of an order or a charismatic shaykh, eventually superseded khanqahs as centers of Sufi learning, and became popular among the religious community.

The dome of Barsbay's mausoleum, as well as that of the two adjacent mausolea--one built for his amir Gani Bak al-Ashrafi, and the other for his court officials--exhibit the earliest examples of star pattern interlace carved on the exterior of stone domes. The strictly coherent, two-dimensional geometrical designs were brilliantly adjusted to the challenging structure of the late Mamluk dome characterized by a steep rise contracting to a pointed apex. This was a shift from the dominant zigzag moldings of stone domes from this period, such as that on the dome of the mausoleum which Barsbay built as part of his foundation on Shari' al-Mu'izz (1425). Characteristic of khanqahs from this period is the mihrab's lack of decoration, possibly a reminder of the ascetic nature of this institution at a time when decoration everywhere else was becoming increasingly lavish. The minbar with its ivory inlay, presented to the khanqah as a gift in 1453, is a Mamluk masterpiece.