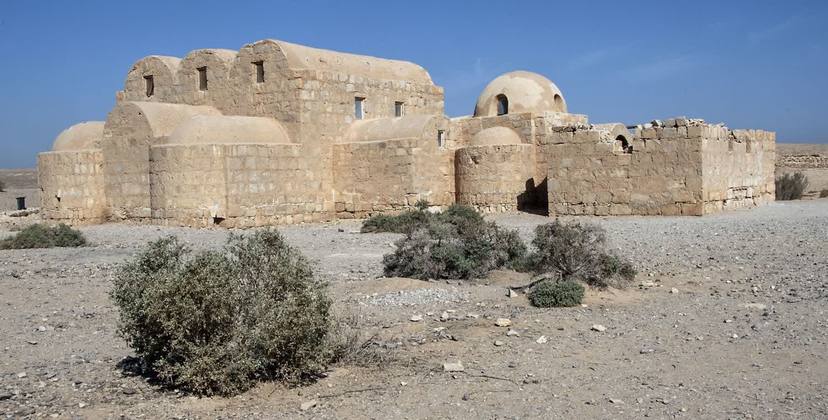 Qusayr ‘Amra, “The Little Palace of ‘Amra,” is a residential and agricultural complex known especially for its large bath house decorated with a fabulous array of fresco paintings. The complex is located in the heart of the Jordanian steppe in an arid, rocky region known as al-Balqa’ (the piebald), approximately 85 kilometers east of Amman. It is situated along the Wadi al-Butum, which eventually flows into the Jordan valley. The complex’s precise date of construction is not known but it is clear that it was built under the Umayyad caliphs of Syria (r. 660-750/39-132 AH), not before 711/92 AH and no later than 750/132 AH.

The once popular attribution of the bath house to the reign of the sixth Umayyad caliph Walid I (r. 705-715/89-96 AH) is based on the presence in the building of a mural depicting six vanquished rulers of late antiquity, including the Visigoth king Roderick, who died in a battle against the Umayyads in 711/92 AH. This interpretation was favored by the philologists who first interpreted the mural’s Greek and Arabic inscriptions.1 Other scholars have questioned the attribution to Walid I. The prevalence of imagery related to the hunt, dancing and other festive pastimes suggested instead to others Walid II (r. 743-744/126-127 AH), who is described as a hedonist by the Arabic sources and, more importantly, is known to have spent considerable time in the countryside in which the bath house was constructed.2 Another compelling reason to reject the attribution to Walid I comes after a reading of the Arabic inscriptions that refer to a prince (amir) or heir apparent (wali al-‘ahd) rather than a caliph (amir al-mu’minin). This evidence suggests a successor to Walid I who would have been alive after the defeat of Roderick but not yet caliph.3

Like many other rural compounds constructed by the Umayyads in the steppes, Qusayr ‘Amra had multiple components including recreational, residential, agricultural and religious. The various structures are situated along the northern flank of the wadi, and include remnants of walls used to control its temporary floods and irrigate the surrounding landscape, which may have included gardens or agricultural plots. The bath house complex is located toward the eastern side of the site, and consists of three components: the bath house itself, a hydraulic operation including a well, water wheel and cistern immediately to its north, and an enclosure wall that forms a roughly triangular yard to the northwest of the bath house.

The bath house is the best preserved structure on site. Its plan is dominated by a large, rectangular audience hall covered by a triple barrel vault dividing the space into three bays running north to south (the east, central and west bays). The main entrance is a doorway on the north side under the central bay. Light enters the hall through clerestory windows. On the southern side of the hall and directly opposite the entryway is a recessed alcove (the central alcove). Two apsidal side chambers flank this alcove (the east and west side chambers), and are entered through doors in the alcove itself. These spaces rise only half the height of the hall and their forms are clearly visible from the exterior of the building, as they project from the large block toward the south.

Adjoining the audience hall to the east is the bath itself, consisting of three sequential rooms, which presumably served as an apodyterium (changing room), tepidarium (warm room), and caldarium (hot room). The apodyterium is tunnel vaulted, the tepidarium is cross-vaulted and the caldarium is domed with two apses on the north and south sides.

Qusayr 'Amra is celebrated for the fresco paintings that decorate most architectural surfaces in the bath house. These paintings depict a variety of subjects including hunting scenes, athletic activity, mythological images, and astronomical representations.

The images in the audience hall include royal themes: on the west wall of the west bay is the famous fresco of “Six Kings,” which depicts Roderick the Visigoth, the Byzantine Emperor (Caesar), the Sasanian Emperor (Khusraw), the Ethiopian Emperor (Negus) and two unidentified figures thought to represent a Turkic and Chinese ruler.

The six rulers depicted on the west wall of the west bay gesture with outstretched hands toward a second the image of a seated figure on the south wall of the central alcove of the audience hall. This figure sits on a throne or baldachin and is depicted frontally and with a halo, all consistent with the representation of rulers in the Sasanian tradition. It is thought to represent the patron of the monument who was a prince at the time of construction.

Another important image is preserved on the barrel vault of the east bay: it depicts a series of artisans at work along with several animals. The artisans depicted include blacksmiths, stone-cutters, and woodworkers.

Equally celebrated is the domed vault of the caldarium, which features an astronomical projection where signs of the zodiac appear with illustrations of the primary constellations found in the northern hemisphere. This portrayal is of monumental significance in that it is the earliest known example of stellar representation on a non-flat, semi-circular surface.