I consider myself a modern nomad who believes in crossing boundaries – both geographic and disciplinary. I was born in India, grew up in Pakistan, studied architecture in England, worked and lived in several countries, and travelled all over the world.

I graduated as an architect from the Architectural Association, London, in 1972, in the era of the Beatles and the Vietnam War. I was lucky enough to study with and be influenced by Keith Critchlow, Elia Zenghelis, Renzo Piano, Richard Rogers, Norman Foster, Peter Cook and the Archigram group, John Turner and Paul Oliver. This gave me a wide perspective of views that has stayed with me. I worked in London for Payette Associates and then returned to Karachi, Pakistan, to my own architectural and planning firm UNIT 4, between 1974 and ’76. After that I lived in Washington DC and helped form the Aga Khan Award for Architecture and was its second Convenor in 1980. Between 1980 and 1983, I was based in Jakarta, working as a consultant, was founder and Editor-in-Chief of the international journal, Mimar: Architecture in Development, and head of Concept Media Publishers in Singapore. I joined the Secretariat of His Highness the Aga Khan in France in 1984 as Head of Architectural Activities, and later was Director of Special Projects of the Aga Khan Trust for Culture in Geneva, until 1994. I was lucky enough to travel internationally, meet numerous architects, decision-makers, teachers and students. I worked on academic, architectural, historic conservation, and artistic projects, all of which expanded my horizons.

I joined MIT as Visiting Associate Professor of Architecture between 1994 and 2000; have been Visiting Professor at Berkeley in 2000 and 2007; and was appointed Distinguished Professor of Architecture and Historic Preservation and Director of the International Fellows Program at Roger Williams University in September 1999. My academic research focuses on contemporary architecture and urbanism in Asia, mosque buildings, and architectural and urban conservation in Asia and Africa. Professionally, I continue to collaborate on architectural projects, and serve on the advisory boards of several organizations. I lecture widely and participate in different forums and international conferences. I am the editor/author of eight books, including, Le Corbusier, Chandigar, and the Modern City (co-editor and author, forthcoming spring 2009), The Middle East: 1900-2000 (English and Chinese editions, 2001), International Style 1925-1965, (published in several languages, 1998, paperback 2002), The Mosque and the Modern World, (co-author with R. Holod, 1997), Contemporary Asian Architects (1995), and Charles Correa (1987). I also have over sixty published articles, in journals and books. 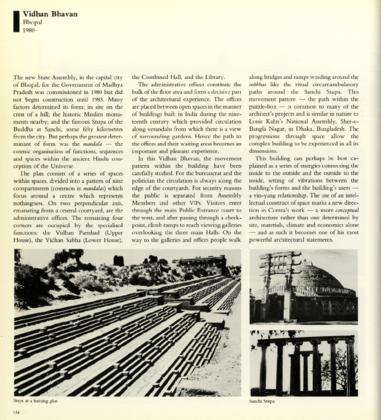 Citation
Khan, Hasan-Uddin, ed. "Vidhan Bhavan." In Charles Correa, 134-139. Singapore: Concept Media Ltd., 1987
Description
Architect, planner, activist and theoritician, Charles Correa of India has earned his place as a major figure in contemporary architecture. His contribution to design and planning has been internationally acclaimed and he has received several major awards including an Honorary Doctorate from the University of Michigan in 1980 and the 1984 Royal Gold Medal in Architecture.

This completely revised MIMAR book examines Correa's work - which covers a wide range of architecture and urban planning - from 1958 when he started his own practice, to 1986.

The book is divided into three parts. The first is an essay by Sherban Cantacuzino in which he explores Correa's approaches to design with "open-to-sky space" in a warm climate and the involvement with trying to achieve equity in the environment through urban planning in India.
The second part of the book, by Hasan-Uddin Khan, illustrates the architect's work in four major sections - Early Work, Housing and Urban Planning, Resort Hotels, Public Buildings - through text, project descriptions and numerous photographs and drawings. A Chronological Lits of Works completes the section. The third part is an essay by Correa himself (written especially for this book), where he explains his own concerns in his work. Biographical and bibliographical information is also included.
Main document
Associated sites
Associated names
Keywords
contemporary architecture
Country
India
Language
English
File type / Size
PDF / 3.36 MB
Document Date
1987
Copyright
Concept Media / Aga Khan Trust for Culture