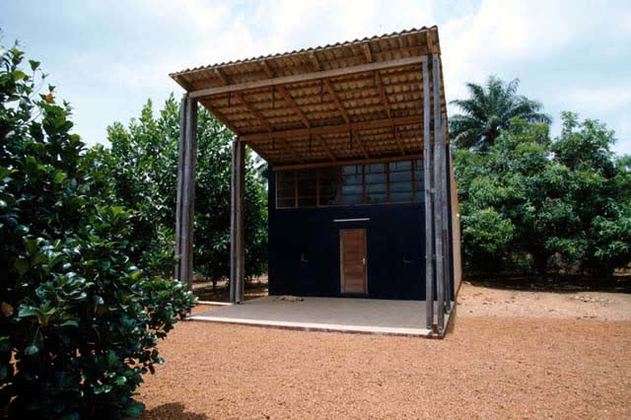 Share
Recipient of the Aga Khan Award for Architecture in 2001.
This school is a small complex built between 1997 and 1998 on a poultry farm in Koliagbe near Kindia, a town 120 kilometres inland from the coast of Guinea. It was made possible by the support given to local initiatives by Eila Kivekäs and the development association she later founded, Indigo. The school was designed by the Finnish architects Heikkinen-Komonen who combined the timber structures typical of their own traditional architecture with local materials, improved by simple technological advances. It is the last of five projects designed by these architects for this client using a similar programme and materials.

The complex was set on the widest and highest part of a quasi-triangular fenced tract of land of 3,800 square metres. The buildings, occupying 340 square metres, are turned inwards onto a central square, reminiscent of the spatial organization of the traditional dwelling units scattered in the lands around the farm.

The structure and materials used had been tested in earlier projects. Thus, wooden porticoes were combined with stabilized earth-block walls and roof tiles made from a mixture of cement and glass or sisal fibre, as used in the Mali projects for a dispensary and Villa Eila.

Climatic comfort was to be ensured by the extension and positioning of shaded areas, by the very nature of the wall and roof materials, and by cross-ventilation through air circulation between the tiles and straw-mat ceilings and via the disposition of openings. The buildings were grouped so that unimpeded air flow was guaranteed. Stringent insulation requirements led to the use of double layers of blocks in the walls, producing a thickness of 30 centimetres which increased their bearing capacity and dispensed with the need for concrete reinforcement.