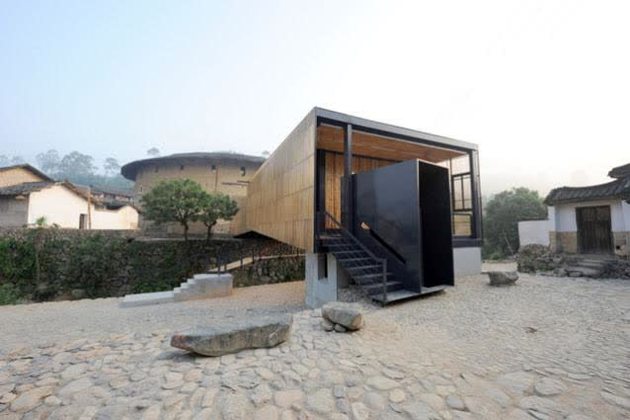 Share
Recipient of the Aga Khan Award for Architecture in 2010.
The ‘Bridge School’ bridges the two parts of the small village of Xiashi that lie on either side of a small creek running about ten metres below the village. The structure is created by two steel trusses that span the creek with the space between them housing the functions of the school. Suspended from the structure and running below it is a pedestrian bridge for the people of the village to use. Small and modern in design, with no reference to the area’s traditional building style, the school has nonetheless become the physical and spiritual centre of what was a declining village. Placed in such a way that it addresses its surroundings, the Bridge School connects the village together, providing a central, social space. The broader social aspect of the project was part of the brief, which was developed with the school principal and head of the village to answer community needs rather than simply those of a primary school. A public library separates the two classrooms and the ends of each classroom, or the two ends of the school can be opened up, creating open stages at either end of the building that are integrated with the public spaces outside. The stage at the northern end can be used for performances, with the toulou as a backdrop. The result is a project that has successfully invigorated the entire community, encapsulating social sustainability through architectural intervention.