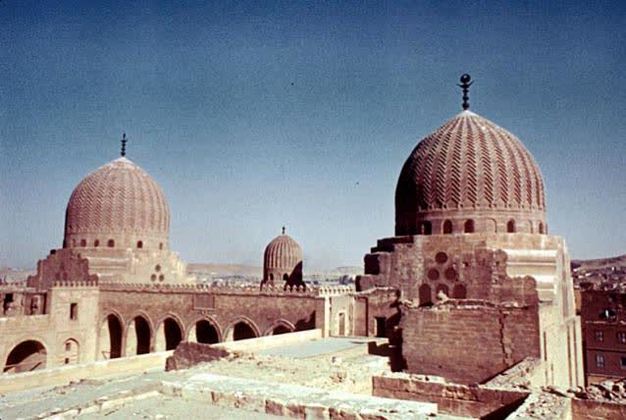 Share
This tomb is one of the major monuments of Cairo and one of the three outstanding structures of the Northern Cemetery. The impetus for the development of the Northern Cemetery was initiated by the desire of Sultan Barquq, the first of the Circassian or Burgi Mamluks (1382-99), to be buried in the desert next to the tombs of venerated Sufi shaykhs, and not in his state monument in Bayn al-Qasrayn. The complex built for him by his son Faraj, at the foot of the Muqattam range, was in reality the first attempt to urbanize the desert. Originally, the complex was planned as the center of a large residential area that was to include, in addition to the main funerary endowment with its kitchens and living units, subsidiary establishments such as baths, bakeries, grain mills, rooms for travelers, alleys, and a marketplace. The complex of Sultan Faraj was built between 1398 and 1411.

The khanqah is unique in its inclusion of twin minarets, twin carved masonry domes covering the two burial chambers, and twin sabil-kuttabs, all organized in bilaterally symmetrical fashion. However, the plan, which comprises a hypostyle scheme deploying arcades on piers and an open central courtyard with adjoining arcades, is that of a congregational mosque. Unlike madrasas, which adopted the extroverted four-iwan plan with the students' cells looking onto the streets and which expanded their role to include Friday prayers, khanqah architecture generally adopted an introverted scheme to ensure the necessary seclusion for the Sufis. However, many of the living units of the khanqah of Faraj have their windows facing outward toward the desert and structures of the dead, which would serve as objects for contemplation.

At the main entrance, visitors can orient themselves with a sign showing the plan of the building, put up by the Egyptian Antiquities Organization as part of their restoration efforts. From the vestibule into the corridor that leads to the courtyard, one steps over an ancient pharaonic slab. The shafts that pierce the ceiling of the long corridor offer both illumination and air circulation. The cooler evening air would force out the warm air and create, by convection, a natural cooling system. From the courtyard, stairs in the northwest corner lead to the upper floors - a complex of rooms, passageways, and cubicles that one both passes on the way up and looks down upon from the roof. In these deserted chambers the dervishes once studied, chanted, and slept. On the second floor, one can sit in the porch of the kuttab over the front entrance. One can climb both minarets, from which there is a splendid view not only of the necropolis but of the surrounding areas. To the north is Heliopolis; to the west, the modern city of Cairo behind the medieval nucleus of al-Qahira; and to the south, the complexes of Barsbay, Qaytbay, and the Citadel.

To the north of Barquq's mausoleum is the tomb of his father Anas, whom he had brought from Circassia and given a position. The building was joined to the mausoleum by an arcade, now in ruins.

Faraj was described by the fifteenth-century historian al-Maqrizi as "the most tragic king of Egypt." Faraj took the throne at the age of ten, and was twenty-three when he was deposed and killed in Damascus. His reign was one of continual strife among the amirs and as such was also a history of their rivalries. 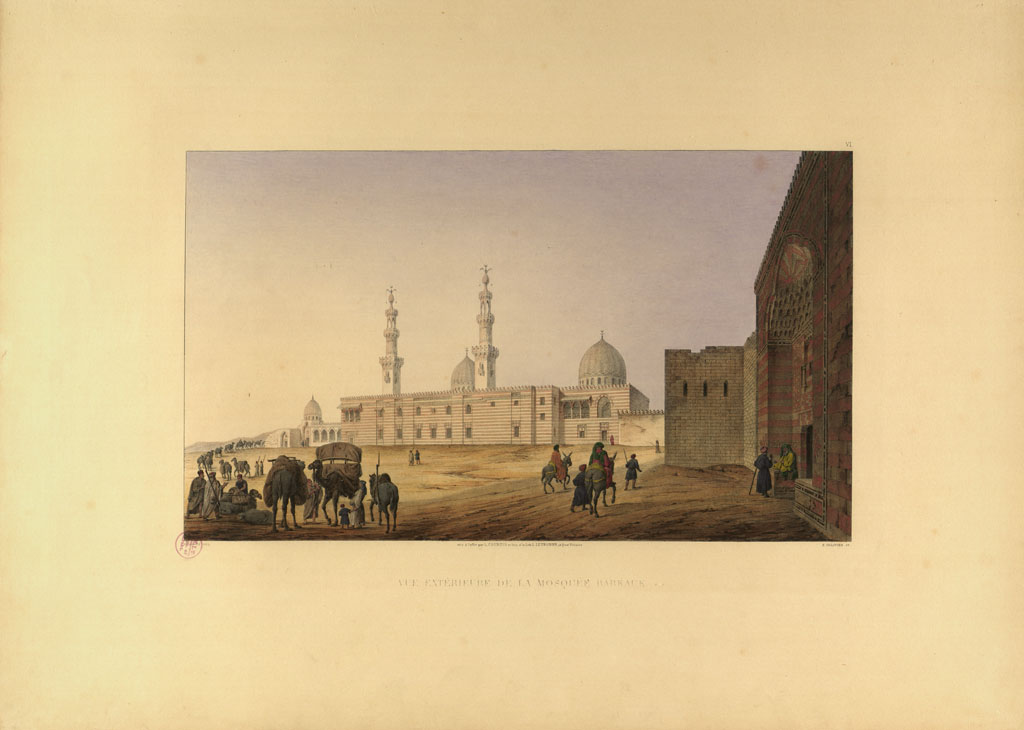