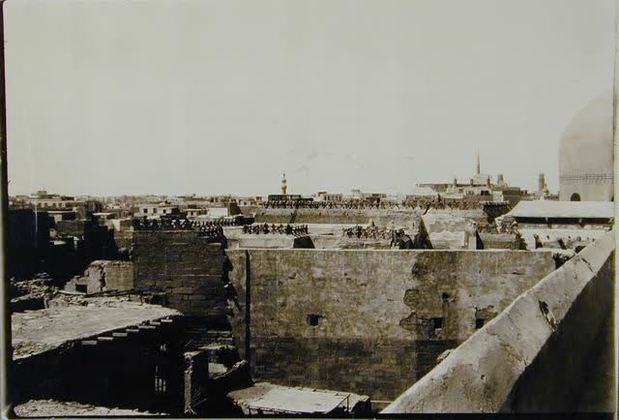 Share
Sultan Barquq, the founder of the Burji or Circassian Mamluk dynasty, built his complex between 1384 and 1386 in the coveted Bayn al-Qasrayn area. The architect Shihab al Din Ahmad ibn Muhammad al Tuluni, who belonged to a family of court architects and surveyors, was in charge of part of the construction. The name of Jarkas al Khalili, the master of Barquq's horse and the founder of the famous Khan al Khalili, appears in the inauguration inscription on the facade and in the courtyard.

Sultan Barquq sought to legitimize his rule by associating himself with the previous dynasty, the Bahri Mamluks, to whom the legacy of fending off the Crusaders and Mongols and espousing Sunni Islam was bequeathed. Having established himself socially by marrying Baghdad Khatun, a widow of Sultan Sha'ban, one of the last descendants of Sultan Qalawun, he ordered the construction of a funerary foundation for his family. To emphasize the continuity he intended he chose a site next to the early Qalawunid monuments on the prestigeous al-Mu'izz Street. This resulted in a continuous wall of contiguous facades with window recesses, portals, crestings, domes, minarets, and bands of tiraz, all executed in different styles competing for visual dominance and attesting to the powerful role of Mamluk architecture in the political arena. Each facade represents an episode in history on the stage provided by the dismantled Fatimid palaces.

Michael Rogers has demonstrated that this complex, with its marble paneling, bronze-plate doors, molded stone ornament, and elaborately worked minaret, was to set the tone for Cairene architectural decoration between 1400 and 1450. The octagonal minaret departs from most minarets from this period in displaying a shaft with stone carving, which, in the 15th c., replaces the inlaid stone work characteristic of 14th c. minarets (e.g., Sarghatmish). The royal rank (blazon) is applied to basic objects and materials like window stucco grilles and rough wood, possibly because building materials were rare and precious.

According to Doris Behrens-Abouseif, the waqf deed refers to this complex as a madrasa-khanqah and to its dwelling units as a rab', a term usually used to denote collective housing. Instead of tabaqa, the term for an individual living unit in a domestic rab, the deed uses bayt, a term used interchangeably with khalwa in waqf documents to describe a living unit in a madrasa or khanqah. The addition of a Sufi program to a madrasa reflects the integration of Sufism into urban life in fifteenth-century Egypt. 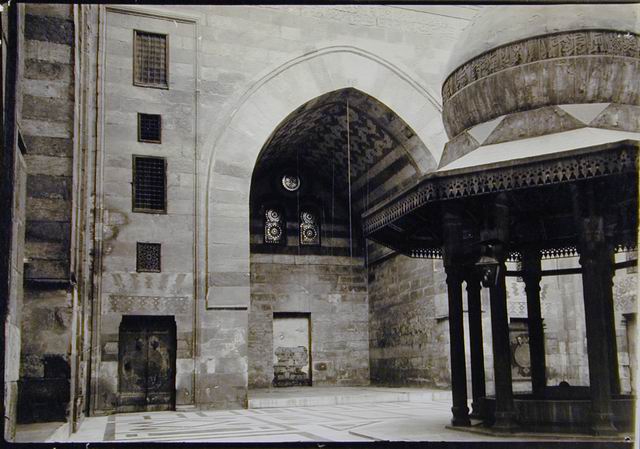