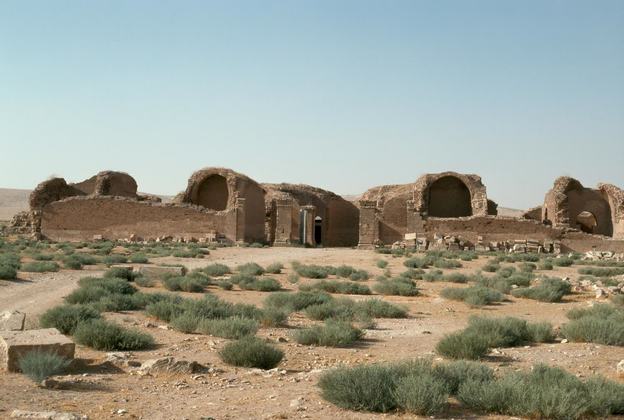 Share
As one of the largest and most impressive of the Umayyad palaces, the unfinished, tawny-toned limestone and brick complex at Qasr al-Mshatta includes an entrance hall, mosque, an audience hall, and residential quarters. It is located in the Jordan desert approximately 32 kilometers south of Amman, a short distance from the Queen Alia International Airport.

A product of the late Umayyad period, it is speculated by several scholars that the Umayyad caliph al-Walid II built Mshatta during his brief reign (743-44) in an effort to commemorate his authority. Construction concluded in 744 when he was assassinated. Massive in size-at 144 sq. meters-it provided accommodation for a large group of people for ceremonial performances and lodging. Byzantine and Sassanian influence is evident in the stone and brickwork, and its plan and design.

The outer walls of the palace remain 1.7 meters wide and vary in height from 3 to 5.5 meters. The foundation and lowest layers of the exterior were constructed in masonry while the upper courses, the domed roof, and the interior walls were made of baked brick. A total of 25 towers support the exterior including four at each corner that are round and two semi-octagonal towers that flank the main gate at the center of the southern façade. All are solid with the exception of four that were serviced with latrines.

Internally divided into three almost equal sections, it is in the middle third on the palace's central axis where building occurred. In addition, this section was further divided into thirds with only one third actually constructed to fruition. One enters an area of the palace that was built only as far as the foundation. This section is partitioned into a main gateway leading into a small courtyard off of which would have stood a mosque to the east and living quarters to the west. A mihrab in the southern wall of the mosque indicates the qibla. Through a doorway on its central northern wall, the small courtyard leads into a larger one that encompasses the core of the entire structure. Directly across from this door is a triple-arched entrance to the north and a complete section of the palace. A colonnaded hallway directly behind the archway extends to a triple iwan, two of which lead into tunnel-vaulted residential suites with the central one continuing into the audience hall/throne room, a small tri-apsidal room covered by a vaulted brick roof.

The most beautiful feature of Mshatta, however, remains in the rich and intricately carved features on its southern exterior, a significant section of which was given to Kaiser Wilhelm as a gift from the Ottoman sultan 'Abd al-Hamid just before World War I and today is located in the Pergamon Museum in Berlin. The façade consists of a zigzag pattern creating a panel of triangular forms, each framing a rosette surrounded by a completely carved surface of interwoven vines, animals and humans, including lions, buffalo, and parrots. The panel stands almost 3 meters in height and 2.5 meters in width. It has been suggested that craftsmen were conscripted from Iran and Egypt because of the use of Persian, Sassanian influenced mythic animals and Coptic iconography inspired by vine and rosette ornamentation.

Al-Asad, Mohammad and Bisheh, Ghazi. The Umayyads the Rise of Islamic Art, 114-117. Amman and Vienna: Ministry of Tourism, Department of Antiquities, Amman, Jordan & Museum With No Frontiers, Vienna, Austria, 2000. 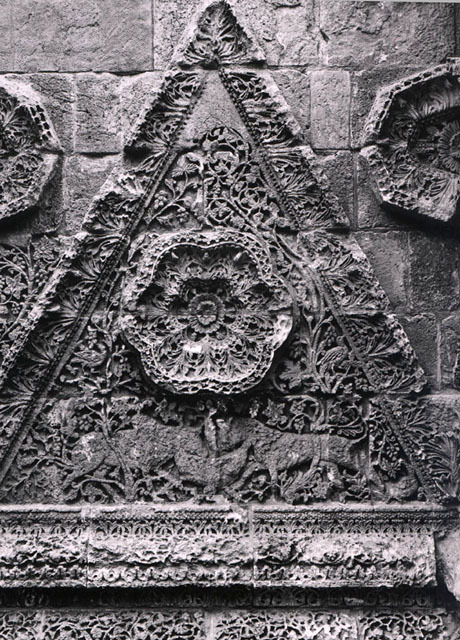