Share
"As a major offshoot of the national Egyptian movement that goes back to the beginning of the century, a number of national leaders, enlightenment pioneers and social thinkers called for the establishment of an Egyptian university. In the beginning of this century, social thinkers like Mohammes Abdoh, Mostafa Kamel, Mohammed Farid, Kazem Amin and Saad Zaghloul called for the establishment of an Egyptian University to act as a lighthouse of liberal thought and to be the basis of a comprehensive academic revival in all the fields of knowledge in order to be able to cope with the international scientific and academic advancement.

This national project however, was severely opposed by the British occupation authorities led by Lord Cromer, who knew that the establishment of the university in Cairo meant the creation of a class of enlightened. well educated citizens who realized that independence was not only physical land liberation but also the emancipation of the Egyptian character and mind. This opposition did not, however, discourage the advocates of the idea who formed the committee of fervent supporters.

The university finally came into being and it was officially inaugurated on December 21, 1908. A great ceremony was held at the Legislative Council Hall, attended by Khedive Abbas II and foreign heads of state. Study began at the university in the evening of the inauguration day in the form of general lectures to be given in diverse places such as the Legislative Council Hall, High Schools Club and Dar AL-Garida.

Eventually, the official teaching sessions were held at Nestor Janaklis Palace where the American University in Cairo today stands. Due to the financial difficulties the University faced during World War I, the premises was moved to Mohammed Sedky Palace in Al-Falaky Street. The first concern of the University was to send some of their distinguished students to Europe to obtain their Ph.D. and then come back to teach at the university. Among those were Taha Hussein, Mansour Fahmy and Ahmad Deif.

The University also established a library that contained invaluable books and treatises that were denoted by Egyptians and non-Egyptians alike. As a result of the University's accomplishments, the government decided to establish a State University in 1917 and set up committee to study the project. The committee suggested that the Higher Schools be upgraded to the university level and annexed to the existing colleges. School of Law and School of Medicine were thus annexed to the State University in February 12, 1923. It was agreed that the old University would merge into new one, with the Faculty of Arts as the core." 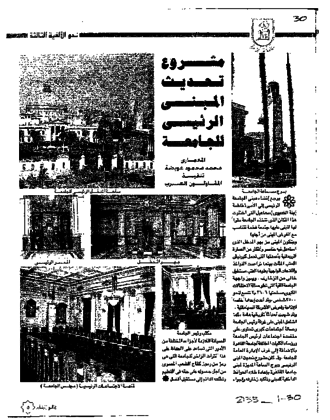