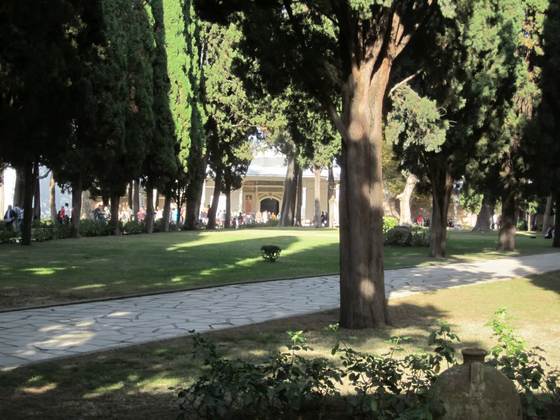 Share
Entrance to the Second Court is through the Middle Gate, or the Gate of Salutation or Bab-ül-Salaam that was built by Mehmed II. The gate was refurbished by Murad III in the late 16th century and no longer has its original gilded doors or portico. The court, enclosed on all four sides by halls with porticoes, has had little altered since the 16th century. To the left, the Stable Court (Has Ahir Meydani) and the Barracks of the Halberdiers with Tresses (Zülüflü Baltacilar Kogusu) - who, among other things, supplied burning wood for the Harem - are located next to the Carriage Gate (Araba Kapisi) of the Harem flanked by the Divan Hall and the Outer Treasury (Dis Hazine). The Imperial Kitchens (Mutfaklar) occupy the right side of the courtyard. The courtyard was once arranged as a miniature wood where gazelles, peacocks and ostriches were allowed to roam free.
Sources: