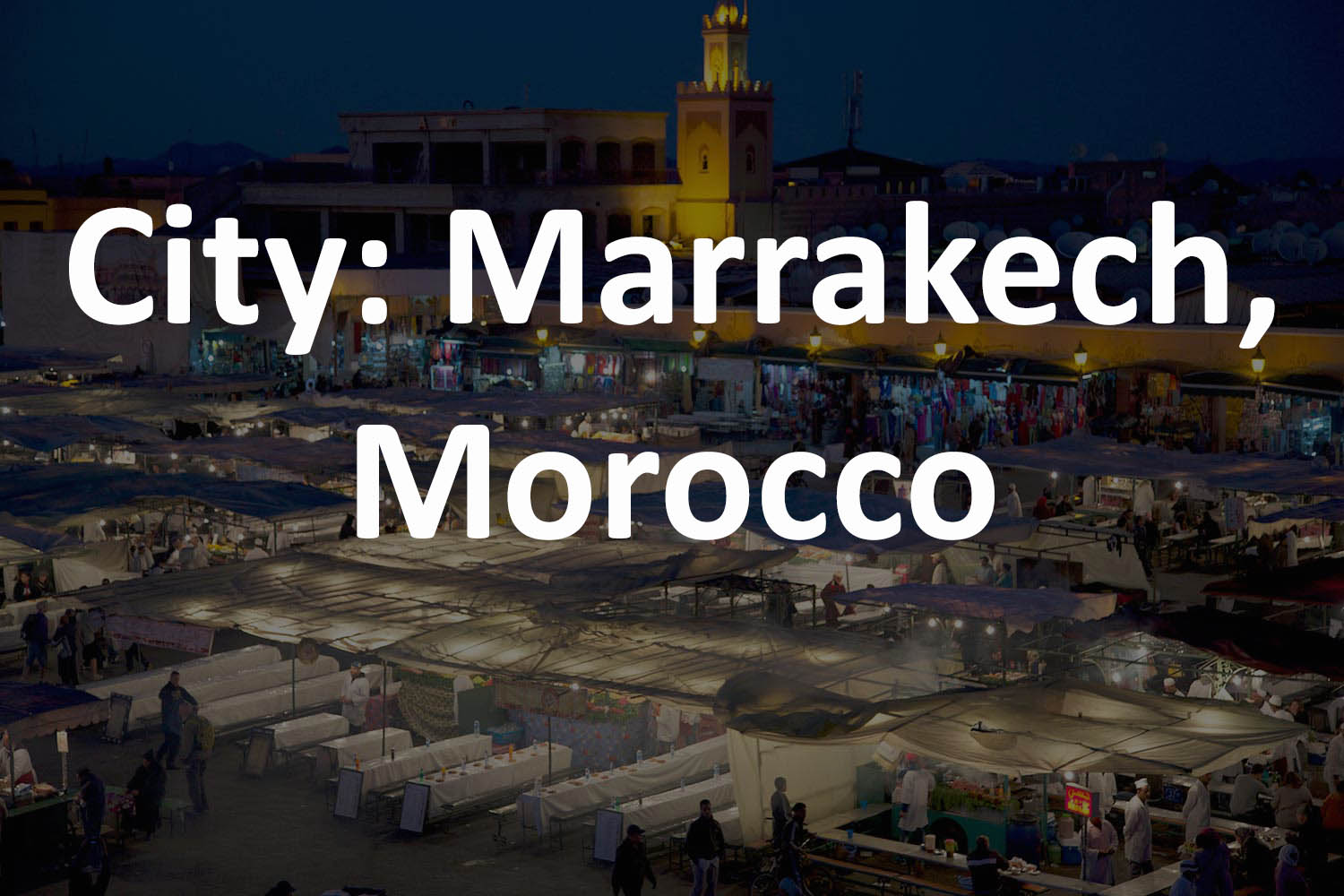 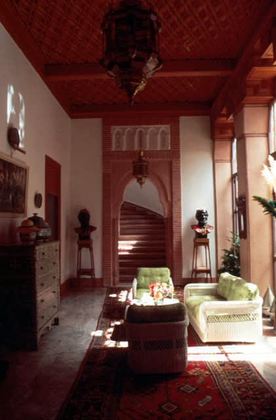 Share
The Ben Jelloun House is located adjacent to the northern edge of the Majorelle Gardens (1929), in the French-built district of Gueliz in Marrakesh. The house was constructed in 1983 for Omar Ben Jelloun, a prominent Moroccan businessman and noted patron of the arts. The house was commissioned to serve as a second residence for Jelloun, whose permanent residence is in cooler, northern Casablanca, during the winter months. Designed by architect Bill Willis, an American expatriate who has lived and practiced in Marrakesh since 1966, the house combines neo-traditionalist decorative motifs and construction methods with a modernist spatial sensibility.

The residence is sited on a square lot that measures forty-six meters to a side. The plot is rotated twenty-seven degrees clockwise from the north-south meridian to align the northern elevation with the street edge. The building itself is approximately thirty-two meters wide east to west and between nine and fourteen meters deep north to south, set back seven meters from the street edge. The long northern elevation of the house faces the street and includes the main entry to the residence, which projects forward six meters from the building face to meet the sidewalk. To the south of the building is a private walled garden, which is forty-six meters wide and approximately thirty meters deep.

While much of the decoration of the home derives from traditional Moroccan residential design, the plan of the house does not reflect Maghrebi convention. Entry to the residence is via a large square hall that is 6 meters to a side and topped by a small cupola, the first of four cupolas in the home. At the south end of the entry hall a stairway leads to the upper floor of the two-story residence, which contains a study and guest bedrooms. A small yet richly decorated bathroom is accessed through a door on the east wall of the room. An opening in the western wall of the hall opens into the large main living room. On the far wall of the living room, on axis with the entry from the hall, is a large chimney decorated with intricate tile-work, one of the most notable decorative features of the house. The living room is subdivided into two spaces by an arcade of pointed arches supported by octagonal columns in white marble with sculpted capitals. Each half of the living room is roofed by a tall octagonal cupola, 5.5 meters in diameter, whose exterior profile is clearly visible along the roof line of the house.

The master bedroom is adjacent to the living room at the western end of the residence. A spectacular mirrored hallway connects the bedroom to its private bath and changing area. The master bathroom exhibits both spatial and decorative complexity, featuring a tiled octagonal bath located directly underneath an octagonal cupola. The smooth, unadorned dome in the ceiling is pierced by sixteen small circular skylights. Together with a delicate metal pendant lamp suspended from the center of the cupola, these tiny windows illuminate the interior of the ceiling volume and create a beautiful day light effect above the bath.

The interiors of the house were designed in close consultation with local craftsmen familiar with traditional Moroccan decorative techniques. The desire of both the architect and client to incorporate traditional forms of construction and ornamentation in the building encouraged a fluid design process in which many decisions were made on site as the building was erected.

The load-bearing structure of the house is a traditional stone masonry construction. On both exterior and interior surfaces the stone walls are coated with tadelakt, a mixture of lime, sand, and clay which is applied and polished to a smooth finish. The tadelakt surfacing was traditionally employed in the construction of hammams.

Intricate tile-work in various applications can be seen throughout the house. The chimney in the living room is adorned with zelij, or precut enameled terracotta tiles, in pink- and brown-toned geometric motifs. The chimney is one of the house's most impressive decorative elements, complete with a sculptural upper form inspired by Turkish mihrab domes and a large surround of tile-work on the adjacent wall plane. Black and brown zelij outline the joints in the octagonal cupolas of the living room ceiling, and the floor surface is composed of both marble and bejmat tiles. Bejmat tiles, square enameled terracotta tiles measuring five centimeters to a side, are typically used as flooring, whereas zelij are primarily seen in the decoration of wall surfaces.

The master bathroom is another highlight of the house in terms of ornamentation. The room is decorated principally in blue tones, including a combination of zelij, blue-tinted tadelakt walls, and marble floor tiles. Metal pendant lamps with grilles in fine geometric patterns hang from the ceiling and provide filtered light for the small room. Adjacent to the bathtub and the sinks are clusters of non-load bearing columns surfaced in mosaic tile work with blue chevron motifs.

The Ben Jelloun House is an excellent example of the neo-traditional residential architecture that was popular in Marrakesh in the 1970s and 80s. Bill Willis and other prominent architects such as Charles Boccara and Abdelrahim Sijelmassi often worked with local craftsmen to apply the rich decorative traditions of Moroccan architecture to the construction of modern homes. The attempt made in this house to blend architectural traditions of the past and present is indicative of a trend in Moroccan architecture of this period to preserve historical techniques of decoration within the process of contemporary design.