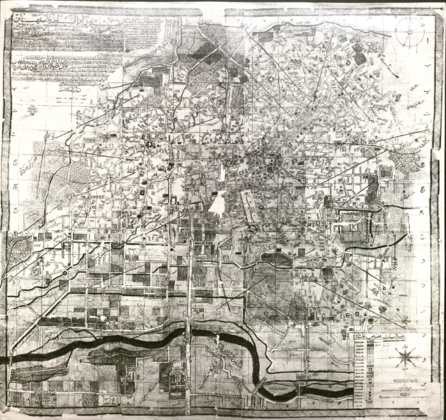 Description
Map of Isfahan created in 1924 and printed in Farsi. This is a reduced size photographic copy print of the map. The original is housed at the Royal Ontario Museum in Toronto.

Translation of the text on the map (by Johanna D. Movassat, Ph.D and Masoud Movassat 12 February 2016):

Bih nam-i khuda (In the Name of Allah (SWT))

The horizontal map (the city map) of each city is one of the [most] important tools of all governmental offices especially for the police department (nazmiye) and the municipality (city hall - baladiye). Unfortunately there has been no proper map for this big and historical city [Isfahan].  If the French Chardin, who traveled to Isfahan at the time of their excellencies the Safavid rulers (may God illuminate their graves), mentioned [places] in some maps of Isfahan in his book, it was specifically about governmental buildings. Fortunately at this glorious time as an indication of the development and the hope that is apparent, under the incredible attention and effort of his excellency Mr. Sultan Mirza Sayyid Riza Khan who is one of the top officials [seems to be the Chief] of the Police Department of Isfahan, [who] in a short time [even] with the extent of [his] official duties and the lack of deputies and [appropriate] means could manage this great job individually. [Even] with the lack of tools because he wanted the benefit of this to be for everyone, he established the printing of this map.  And whoever has any information about drawing this map will approve that this respectable person, after receiving the initial information, has put in an extraordinary effort to draw this map, such that it requires thousands of words of praise and exclamation for this individual. And this writer in my own words after seeing this map, [which is] the proof of progress and advanced development, am thankful and happy beyond expression, and with deep appreciation I also ask God Almighty’s approval and blessings for this individual.

The Map of the Dar al-Saltana [Abode of Kingship] Isfahan

All the sciences of beginning and the end, with attention to the world beyond

[It is] Said that this entire map is the beneficiary without history,

Since it is known that a local map is extremely needed especially a city map for a police department, [it was] at the time of the Deputy Major Ahmad Ali-Khan-i Zand who in 1298 was in charge of the Police Department of Isfahan who demonstrated his entire support in the preparation of the complete map of the city of Isfahan, by assigning this simple person [the writer] who works under the supervision for Sultan Mirza Sayyid Riza Khan, who was one top officials of the distinguished department of the police [chief?]. Besides performing my duties I accepted and started this work, [but] without the proper tools and means, in the year 1299 and [finished it] in three years on the 25th of Capricorn of 1302, having prepared the map with the scale of 1/4000 depicting all the neighborhoods, streets, religious centers, public baths, and gardens, and the rest (that came to my personal attention). And [for the purpose of giving] this humble service for the benefit of the public, it was published on the best paper with the finest print.

But it is [important] to mention that there is some previous engineering knowledge [used] in the maps; originally the buildings of Isfahan were finely designed and the streets and the passageways were parallel with each other from north to south and east to west, in a very beautiful and organized manner [representing] the pleasant atmosphere of this historical city.

Then after conquest and military activities [experienced] in the country, all the towers, gates [walls], and other places gradually were destroyed, resulting in a very unpleasant appearance. Fortunately, at the time that I was in service [I have seen] under the sun of prosperity that has shined on the country (under the presence of Sardar Sipah [Riza Shah Pahlavi] damad heshmate), and from all aspects the country has begun to progress and [achieve] prosperity, and Isfahan, under the effort and control of the powerful ruler and his excellent service [Riza Shah Pahlavi], has started to have progress (including leveling, expanding the passage ways , establishing streets), and there is hope that the city will soon return to its previous shape.

The atmosphere and the culture of the people, the improvements of the appearance of the neighborhoods, and natural geographical location of Isfahan require a more extensive explanation, and since there was not enough space on this map, we have not mentioned them here. Inshallah we will publish [this information] in a separate document.

At the end, in places where roads and angles [cross roads?] were created like Khush St., Marizkhana [Hospital] St., Ahmadabad Street, Gulbahar St., and Bidabad Road, fields (Babaldasht), and so on, since they were under repair and construction, we as a whole did not indicate their details.

Printed in the expert office of Mr. Mir---hang

Mr. Sultan Sayyid Kharamazi (?) has been successful in drawing the map of the city of Isfahan, the Ministry of Science acknowledges and admires his efforts and hopes that his distinguished service is accepted by those who are in the know.