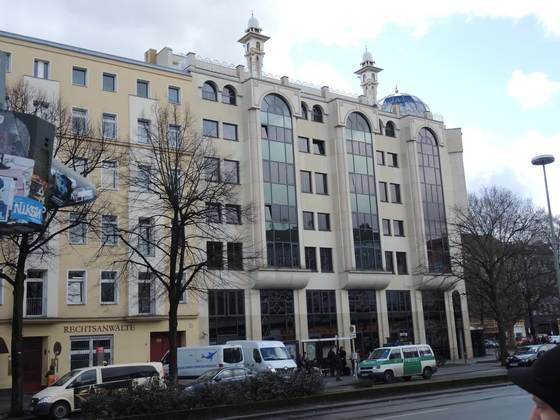 Share
The Maschâri Center was built on the site of a supermarket that was burned down during riots in 1987, and has played an important role in the redevelopment of the area.  It is a multi-story building in Berlin-Kreuzberg that contains educational, commercial, and communal facilities, as well as the Omar Ibn al-Khattab Mosque. It is essentially a modern day, urban mosque complex.
Constructed in 2010, the main entry on the ground floor leads to the principle door of the the Omar Ibn al-Khattab Mosque, at the center of the building.  Corridors to to the east and west contain multiple commercial establishments that serve the community, including a cafe, restaurant and barbershop.  Floors above that contain a school, banquet hall,  bookstore, mortuary, and offices, among other things.  On the first story below ground are a hallal butcher shop the ablution area and restrooms, and the mortuary.

The exterior is designed by architects, Günther Barnstedt and Muhammed Miri, to blend with the surrounding architecture, while simultaneously signalling the religious nature of the structure with four minarets, domes, and arches. The facade rises to the same height as surrounding buildings, though the dome and minarets rise slightly higher.  The facade and its arches are intentionally designed to resemble the facade of the nearby commuter rail station, U Görlitzer Bahnhof, a location that makes it convenient both to worshipers and to visitors of all faiths, which the Center encourages.
--Michael A. Toler, Archnet Content Manager
21 July 2015
SOURCES:
L'Association Des Projets De Bienfaisance Islamiques. Brochure: Inauguration Du Centre Islamique. Mosquee Oumar Ibnou Al-Khattab. Berlin, 2010.
"Maschari Center." Islamische Verein Für Wohltätige Projekte. 2015. Accessed July 21, 2015. http://ivwp.de/ivwp/maschari-center/.
"Minarette über Kreuzberg." Der Tagesspiegel - Berlin. May 21, 2007. Accessed July 21, 2015. http://www.tagesspiegel.de/berlin/minarette-ueber-kreuzberg/852270.html.
"Umar-Ibn-Al-Khattab-Moschee." Wikipedia. Accessed July 21, 2015. https://de.wikipedia.org/wiki/Umar-Ibn-Al-Khattab-Moschee.