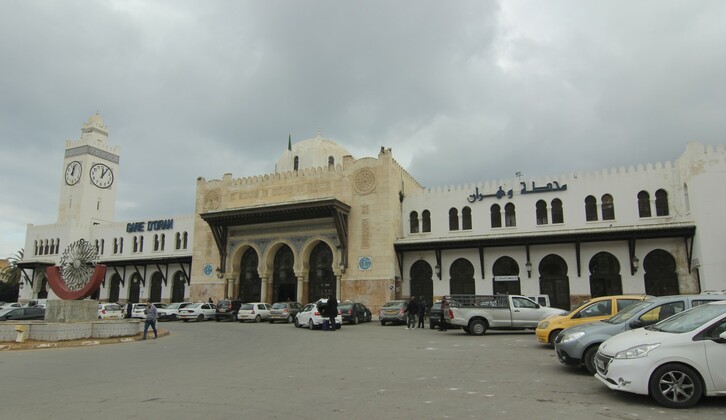 Share
This station was built in Oran during the French occupation by the architects Marius Toudoire and Albert Ballu, on behalf of the French railway Company of that time P.L.M. It was built as a substitute of the old station which was unfit to receive the growing number of travelers. Indeed, at the end of the 19th century, Oran became the railway node of western Algeria. The city was continually receiving passengers and freight, and needed a new station to match its new status. In 1908, architectural and engineering studies for the new central station were completed. In 1913, it was opened to the public, and had six platform lines.
The most remarkable feature in this station is its neo-Moorish style that mimics the religious monuments of Tlemcen and Algiers. The station clock tower has the shape of a Moorish minaret, surmounted by a small lantern. The lobby is crowned with a large 8-sided dome, decorated on its underside with muqarnas. The first level of the facade is perforated throughout its length with Algiers-style doors, protected by wooden awnings. The second level is a series of geminate windows, assembled in the form of bay windows around the corners of the building.