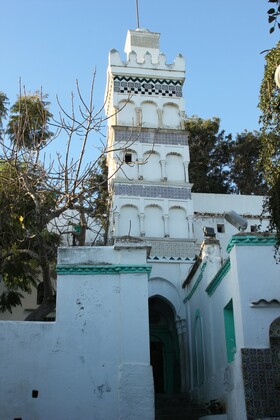 Share
This zawiya is famous for containing the tomb of the patron saint of Algiers Sidi Abd al-Rahman al-Thaâlibi who died in 1471. It should be noted, however, that the name zawiya is inaccurate since there is no dervish order that it is taking residence in the building. Currently, the site is used as a funeral mosque where several Algerian historical figures are buried.
During its history, the site has undergone several modifications and additions. The first building dates from 1611, one hundred and forty years after the Saint's death, and was only used as a burial place. Not much remains of this first construction, only the columns and capitals of the current burial chamber seems to date from this time. Later, each era added improvements to the work of its predecessor. Indeed, several characters have contributed to its enlargement and beautification such as Oukil Abdelkader and Oukil ben Wadah. However, history will retain the name of Dey al-Hadj Ahmed al-Euldji, who decided in 1696 to turn Sidi Abd al-Rahman’s tomb into a funeral mosque. Most of the Zaouia dates back to this period.
Currently, the mosque has once again become a mausoleum. The site is located on very steep terrain, where you have to go down a long staircase to access its various parts. The site therefore includes: outbuildings of the mosque, minaret, cemetery, tombs, and the funeral chamber furnished with a mihrab.  This room is an irregular quadrilateral covered by an eight-sided dome of 8 meters in diameter. This dome has on its four sides windows arranged in triangle and protruding outward.
The square-based minaret was added during the last transformation of 1729. Each side of the minaret is composed of three triers, decorated with four columns supporting depressed arches and separated by Zellij frieze. The whole is crowned by a square-based lantern crowned by a small eight-sided dome.
Over the centuries, a real necropolis has been built around the mausoleum, each time adding tombs to the burial chamber. There are tombs of several Ottoman governors, but also the oukils (agents in charge of looking after the mausoleum) who served this holy monument. Today, the mausoleum is extremely popular among people of Algiers, especially on Holy Fridays and religious holidays. The collective memory of the city designates the Sidi Abd al-Rahman’s mausoleum as a place of commemoration and witness to ancestral values.
--Amine Kasmi, 2018
SOURCES:
Berque, Augustin. L'Algérie terre d'art et d'histoire. Algiers: Heintz, 1937.