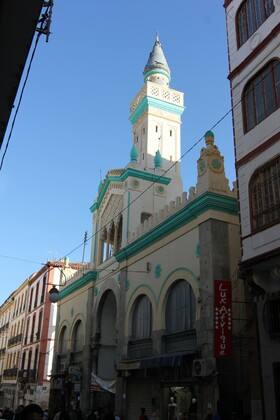 Located in the heart of the old town, the Great Mosque of Constantine is the only Islamic monument of the city that predates the Ottoman era. The research carried out by the Algerian archeologist Rachid Bourouiba made it possible to define the date of its construction under the Hammadids in 530 AH/1135-1136 and its restoration under the Ottomans in 1180 AH/1766.
This mosque was built on the ruins of a Roman temple. In fact, the columns of the prayer room are from the salvation of ancient shafts and capitals, which most of them are Corinthian style. Furthermore, the columns adjacent to the mihrab have kept their original locations of the Roman temple. They differ from the others by their high height.
On the qibla wall, the mihrab niche is topped with a fluted half-dome and fronted by a pointed arch, which its intrados draws interlaced lobes. The mihrab presents a number of commonalities with Fatimid art. Its form, for instance, reproduces that of the main entrance of Jami 'Al-Aqmar. However, the two capitals of mihrab remain purely Hammadid. These are the oldest capitals with lateral volutes of this type in Algeria.
The mihrab nave is in an off-axis position relative to the prayer hall. This is due to the removal of a nave on the north side during urban renovations that were carried out during the French occupation in the mid-19th century. The facade and the minaret also date from this period, although it is possible that the location of the minaret is original. It has a square base with a circular lantern forming a taper. As for the facade, it is marked by a ground floor occupied by shops, because of the location of the mosque in the souks area.
Between 2014 and 2017, the mosque was close to the public due to restoration works.