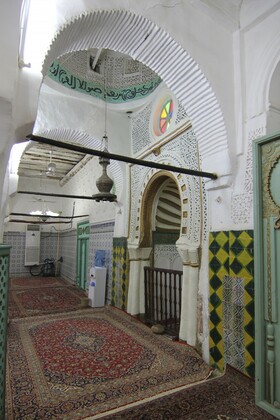 Share
Located 20 km from Biskra, Masjid Sayyidi ‘Uqba was built at the burial site of 'Uqbah ibn Nafi', the Arab General who led in the first century of the Hijra the Islamic conquest of the Maghreb. It is the oldest still-active mosque in Algeria.
Although it has been remodeled several times, this mosque takes up the ancient tradition of the Mosque of the Prophet in Medina. First, the arrangement of the naves which are parallel to the Qibla wall, without being crossed by an axial nave. Another similarity is the use of palm tree trunks for columns. In Sidi Okba, the palm trunk columns are covered with lime mortar and bear horseshoe arches maintained by wooden rods. The capitals are also covered with thick mortar and devoid of any decoration. The mihrab is flanked on both sides by compound piers ending in capitals garnished with hollow stripes. The mihrab niche is topped with a half-dome chiseled with radiating flutes.
Located in the south-west corner of the prayer hall, the minaret is square-shaped at the base with two triers. In the first level, it is decorated with curvilinear geometric patterns on its East and South sides. In the second level, it has arches on its four sides, ending with merlons at the top. Adjacent to the minaret, the burial chamber is square too and crowned by a dome. In one of its pillars is embedded vertically an ancient inscription engraved in Kufic Arabic characters. According to the shape of the letters, it would date back to the eleventh century. Here is a translation: “This is the tomb of 'Uqbah, son of Nafi', may God grant him his mercy.” The mosque also contains a beautiful carved cedar double door, dating back to the eleventh century. However, some historians such as Paul Blanchet attributed it to the last years of the ninth century or the beginning of the tenth century.
In 2009, the mosque was incorporated in a large Islamic complex. Indeed, the site is no longer just a mosque but a modern complex with a new prayer hall for 5,000 worshipers, a Koranic school, a library, a conference room, and a dormitory for students. The old mosque has been surrounded by porticoes and no longer serves as a mosque. It became a place of meditation in memory of the revered 'Uqbah ibn Nafi'.