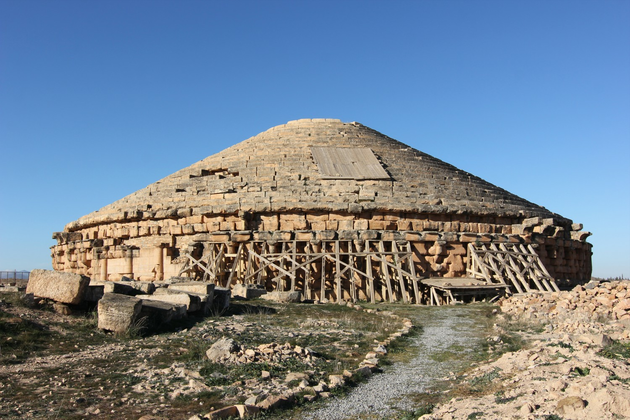 Share
The Medrassen is the oldest extant mausoleum in the Maghreb. Located 34 km northeast of Batna, it would belong to the Numidian Massyles kings dating back to the third century BCE. Although, because it bears no inscription, a second century BCE date has also been proposed, attributing it to their predecessors the Masinissas. Many historians legitimately suggested that the name Medrassen, or Madghassen which is the more correct orthography, comes from Madghes who was, according to Ibn Khaldun, the ancestor of the Numidians which the Masinissas and the Massyles were descended.
Architecturally, Medrassen is a cylinder capped by a stepped truncated cone. The cylinder, 58 meters diameter, is surrounded by 60 engaged columns of the Doric style. The cone is composed of 23 stepped levels (not 24), reaching a height of 18.5 meters. Because the the height of Medrassen is so low low in relation to its diameter, the monument appears somewhat squashed. The entrance consists of a small bay (1.6m x 0.7m) in the East of the cylinder, concealed beneath a sliding slab. A gallery was discovered in 1873, leading to a sepulchral chamber, in the center of the monuments. This chamber is fairly cramped, measuring just 3.3 meters in length and 1.5 meters i width.
The Medrassen was built in a mixed style that illustrates the interaction of builders in the Maghreb with the Hellenistic world. Indeed, its decoration is a mixture of elements borrowed from the Greeks (Doric columns), and the Egyptians/Phoenicians (cavetto cornice). However, despite that its architecture reflects external influences, this pre-Roman, and naturally pre-Islamic, monument gives evidence of the local Moorish construction techniques that served as a model for other pre-Roman mausoleums, such as the Tomb of the Christian Woman.
The monument was restored by a team of specialists during the 1980s. Although it was proposed in 2002 for the UNESCO World Heritage List, the 2006/2007 ICOMOS Report on Monuments and Sites in Danger raised concerns regarding repairs done in the early 2000s  that had been executed “without respect for the value of this monument and its authenticity.”
--Amine Kasmi, 2018
SOURCES:
Les Mausolées Royaux de Numidie, de la Maurétanie et les monuments funéraires pré-islamiques. Accessed February 03, 2019. http://whc.unesco.org/fr/listesindicatives/1776/
Gsell, Stéphane. Les monuments antiques de l’Algérie, tome I. Paris: Albert Fontemoing Éd., 1901.
ICOMOS World Report 2006-2007 on Monuments and Sites in Danger. “Mausoleum of Medracen in danger.” Accessed February 03, 2019. https://www.icomos.org/en/what-we-do/risk-preparedness/heritage-at-risk-reports/116-english-categories/resources/publications/207-icomos-world-report-2006-2007-on-monuments-and-sites-in-danger
Camps, Gabriel. “Nouvelles observations sur l’architecture et l’âge du Medracen, mausolée royal de Numidie.” Comptes rendus des séances de l’Académie des Inscriptions et Belles-Lettres 117 (3) (1973).